Last night was so hot that we slept with the doors open ( and just for a laugh, mother nature conjured up a 1 minute rain shower to come in the hatch – ha flippin ha!

After breakfast we crossed the cut to the services, emptied the rubbish and both showered before returning to our bankside mooring just as two boats that had successfully crossed from the Lancy arrived. 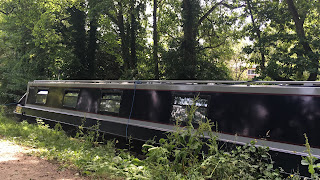 We decided that we would move down to Rufford as there are nice shady trees there. We un-pinned and set off just as the other two boats decided to go so we were first at the swing bridge and graham had to let them all through. We could see boats on the Rufford visitor moorings so we stopped by the old disused Rufford hall lift bridge where the tree cover seemed best. 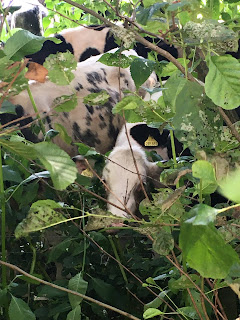 We , and our bovine neighbours, then sat out the heat in the shade of the trees. As the day started cooling off, Graham walked back up the services to fetch the car ready for our trip out tonight. As he returned to Jannock he spotted a suitable gap at Rufford visitor moorings that was nice and shady so we moved down there. Apparently these 1 day moorings are now 14 day moorings to cater for the cancelled Ribble link bookings so that boats have somewhere to wait. They are still signed as 1 day. 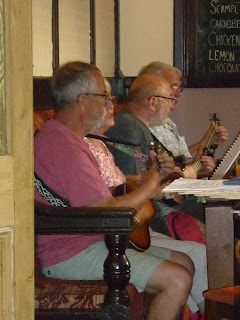 In the evening we went to the Crooke Hall Inn where our banjolele band neighbours, Maggie's Misfits,  are practicing tonight. They kept us entertained with a good repertoire of songs which we are sure their composers would never have imagined them being played by such a group. An excellent evening.

We took a video of one song https://youtu.be/bQtYr_7mVbQ

It was good to meet you when we were both moored at Sparks Bridge. I was alarmed to see that all bookings through Poolstock are currently cancelled so I do hope that they let you escape before too long! At least were are glad that we did not attempt to go south for a short while as IT might well be that we would not have been able to return in time for out end Aug booking to the Lanky! Best wishes.