One fine day (how wrong can one be?)

The weather forecast was promising and so it was decided it was time to turn Jannock round. This was to achieve two objectives:-

1. Get her facing North so I can do a pumpout.

2. Test the recently fitted replacement gearbox before heading of for the summer.

We arrived at the mooring, fitted the replacement gas bottles and were ready to set off just as another southbound boat appeared through the bridge heading for lock 59. We agreed to share with them and partnered them down to Winkwell bottom lock where we winded for the return journey back to the mooring. The run south was good with the gearbox performing as expected although Brenda says the morse control is stif 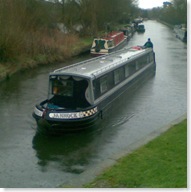 fer that it was previously. That'll be the extra 90 degree bend in the gear cable due the the new location of the actuating lever. On our return through Winkwell swingbridge it amused me to watch two cars, one either end of the open bridgehole, each determined that they would be the first to cross once it closed.  The car on the pub side finally had to concede defeat, and back off, as two more cars arrived down the hill and queued before the first car on the other side. Ho hum, it doesn't take much to amuse me.

By this time the drizzle that had started during our run south was now turning into a proper rain session and so we were we drownded by the time we arrived back at the mooring and both required a complete clothes change to get dry.

I am pleased to report that the replacement gearbox is a success, performing correctly during Brenda's turn at Winkwell and with no evidence of any leaking oil on our return.

I'll wait for another day to complete the pumpout, lubricate the gear cable and sort out the starboard side paintwork.