Usually we arrive back with our hats and mitts in place, yet failing to keep us toasty – well me at least, as G. has had a day full of locks. Then it’s a hot drink to keep us warm and a quick exit home to our centrally heated house. Today we moored up, sporting tee-shirts, did a bit of gardening at the mooring, had a cuppa to re-hydrate and ate our dinner on board to soak up the last of the sun. What wonderful weather for October. Looking back, we’ve been blessed with a very good summer especially as we are able to count the exact number of times we’ve actually got wet whilst boating this year. 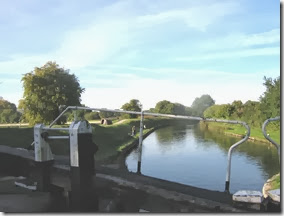 We set off from Marsworth and climbed the flight solo. Graham found a new best friend at the reservoirs. A delightful old chap who watched us work through a couple of locks and was interested in everything. He was telling me all the things his mum got him to do to make the food go further during the war. The abundance of fruit this year was bringing him happy memories of blackberries as a sauce with rabbit and apples under suet dumplings in 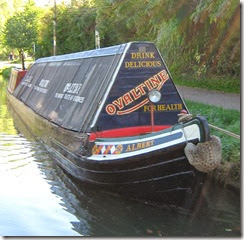 stews. He stated his favourite is plum cobbler. He reckons he’s had about 15lbs of plums this year. I hope there’s a ‘girl’ at home, that his mum would have approved of, to make jam, pickles or even a drop of sloe gin with the harvest he collects.

We passed nb Minnehaha moored at Tring Station and thought happy thoughts of the late Bill Sibley who used to own the boat. He is sadly missed. 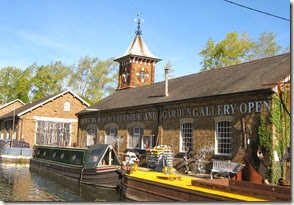 At Berkhampstead there was a fishing match going on in the park and I was perversely disappointed that one fisherman didn’t catch a child. Not that I mean harm to the victim, erm, child but it would have proved a point. As boats pass fishermen using long poles take them backwards, horizontal with the ground. Today that happened across a footpath along the edge of the park. They had their pole rests located 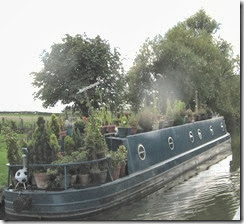 either side of the path. As Jannock approached I got scowled at, poles were pulled back and woe betide anyone using the footpath. A couple of kids, about 7 years of age, came onto said path on their bicycles. Now, they were a bit wobbly and had no idea about fishing so it was no surprise that one poor child nearly got kebabbed as a fisherman put a long length of carbon fibre across the path about a foot off the ground  immediately in front of the bike. Fisherman didn’t look and child was too busy staying on his bike to notice. At the last second his following parents yelled and he fell off – safely. Shame he didn’t land on the fishing pole and break it.

Outside the Rising Sun we met Debbi and Simon. Poor Debbi is on crutches again 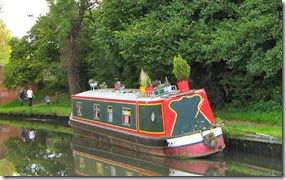 having sustained a double compound fracture of her ankle. Getting naughty cats back on board for the night is obviously dangerous.

At Sewerage lock the trusty bike was put back on Jannock and we entered a very low pound indeed, I have never seen it this low before in the seven years that we have moored here. It seems that some-one walked down with a windlass and lifted the ground paddle of lock 50 where the bottom gate paddle has to be left open to keep the level right in the pound above. It was still about 20cm down when we finally locked up and went home at 6pm.

That’s it for now. I’m sure that G. will be along soon with some statistics for this year later. Off to find some more sunshine in the Med. next week.

Posted by Jannock at 7:23 pm No comments:

Up and at-em at 9am but no-one to share Soulbury 3 with. Never mind, 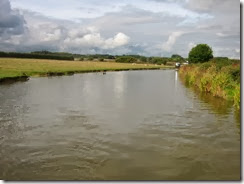 they were all in our favour and folk turned up to come down, as it were, at the top lock. Another day of super weather, especially as in the past we have risen from our bunks on October mornings in these parts to find frost on the ropes. This year’s weather has provided an abundance of 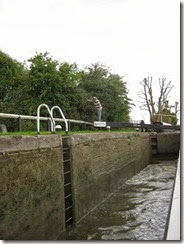 fruits to be foraged. Twice Graham set a lock to fill slowly to allow us time to pick fruit. Blackberries, again, and a fab haul of plums. Jam will be made.

Today we actually avoided what looked like becoming an inevitable crump. As we rounded a blind corner nb Cat’s Whisker came steaming round the other way, on the wrong side, heading straight for us. Much manoeuvring by both of us put a gap of, well, 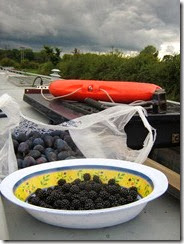 a cat’s whisker between us and their new paintwork remained un-touched. We were told that they were newbies and so we must praise the steerer for the avoiding action he took which complemented our own.

At Marsworth we found ourselves moored under a plum tree and so the short boat hook was put into service to bring down some of the high fruit  much to the delight of the small boy who caught them & he was going to present them to hid nanna.

Chicken korma and keema paratha for supper and then onto the Red Lion for a beer.

Posted by Jannock at 6:31 pm No comments: