… and have a good laugh at the same time. Whilst we were on the Jubilee pub-crawl 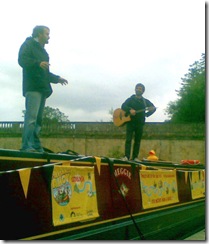 around Manchester in early June, Brenda picked up an program of Olympic cultural events and we spotted the existence of Pleasance Ahoy which is a narrowboat wending it’s way from London to the Edinburgh festival travelling by the canals and rivers. 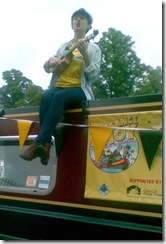 Tonight we went to the Boat House at Wallingford and enjoyed an excellent evening of comedy even if the event was not very well attended. This shortage of audience may be due to a lack of local publicity or the fact the the Olympic torch is due through Wallingford at sparrow’s fart tomorrow morning, I’m not sure.

We were entertained tonight by Phil Nicol,  Simon Feilder, Lloyd Langford, compared by Tim Fitzhigham, who told us about his exploits rowing a bath across the channel, and Nichola Redman performed a great last act with a song about Goring ;^)  Their website at http://www.pleasanceahoy.com/ gives all the details of forthcoming gigs and we thoroughly recommend it for a good evening out. The tickets are free but if you obtain them online, in order to ensure you  can get in if it’s busy, there is only a very small booking fee to pay. Our two advance tickets for tonight were totally un-necessary due to the shortage of audience, but only cost £1.90p anyway.

Go along and support them when they come close to you, it was a brilliant evening and because the weather held off, they even   moved the show outside and used the roof of their 69foot Black Prince hireboat as a stage. Lloyd Langford reckoned it’s the first time he’s ever been heckled by wildfoul!

Posted by Jannock at 9:16 pm No comments: 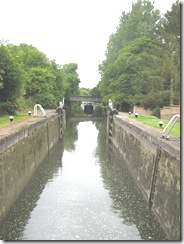 Survey complete, Parglena needs to be moved back to Bourne End again – Oh dear! another early morning start for Brenda. We arrived at the meeting place, Ricky Tescos,  at about 8:15 for an 8:30 start. Brenda hit the store to fetch some things we’d run out of at home and J&C were already there re-provisioning. 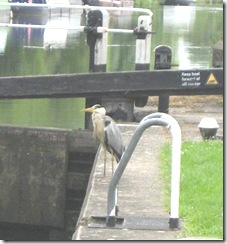 I off loaded our stuff onto Parglena and then went and abandoned the car on a side street. We set off North with very little Southbound traffic to worry about and made good way with everything set in our favour  until we reached Cassio Bridge lock. At North Grove lock a heron was sitting patiently on the lockside watching the water in the empty lock below. He wasn’t upset by my arrival there and allowed me to open the lower gates and then take a couple of photos before deciding to make a move when I tried to get a better photograph.  When we were leaving Iron Bridge lock in Cassiobury park, a dog walker informed me that there was a southbound boats coming down Cassiobury park locks. When I got there both locks were in our favour but no sign of a moving boat, they must have rapidly moored up in the park as I didn’t spot them. As we approached the M25 bridge, after leaving North Grove lock, there was a circus in the field adjacent to the canal which had tigers and camels patiently awaiting the next performance. Once under the M25, the 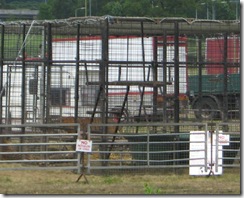 heavens opened and I got a right soaking whilst lock-wheeling ahead of the boat, the rest of the crew were safely tucked inside and Julian had a large umbrella to hide under, but I didn’t even have a waterproof with me. Never mind, I only had shorts and a shirt on anyway and I did have the forethought to bring a spare set of clothes with me for when the trip had finished. As we ascended Kings Langley lock a widebeam narrowboat thingy was winding about bridge 157 and so I wasn’t sure who’d arrive first at Red Lion lock after I had set it. After a while Parglena hove into view having passed the other craft when it went aground whilst travelling too close to the towpath on the inside of a bend. By now I was steaming gently as the sun and warm air evaporated all of the wet-stuff from my meagre clothing. I must have left a steam trail behind me, like an old railway engine, when I was cycling between locks. We passed through Apsley with no issues but there was a boat tied up in Boxmoor lock when I arrived there on the bike. Both top paddles were up and a windlass was still fitted to the towpath side one but no sign of the owner. I opened one topgate, removed the windlass and then went an knocked on the cabin side. Out popped a young man, book and sandwich in hand who was surprised when I handed him his windlass and then untied his boat sending him on his way so that I could turn the lock for Parglena. He set off wearing just a cardigan just as the heavens opened once more. Up through Fishery, Boxmoor and Winkwell found us back at Bourne End and the end of another 12 mile cycle ride for me. Why do they call this boating?

A day crewing on Parglena 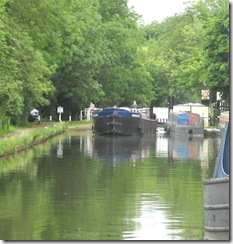 visit Uxbridge dry dock for a survey. Brenda and I  volunteered to crew and so rose early and set off to Bourne End where we arrived just as Parglena had returned from turning round below Top Side lock. I mounted Jannock’s trusty lock wheeling bike and there I stayed for the next seven hours, all the way down to Batchworth. That’s 12 miles in the saddle and don’t I know it!

We moved along quite quickly until we were leaving Red Lion lock where a wide beam trip boat left their moorings below and pottered along slowly with Parglena breathing down it’s sternpost. I had cycled ahead to prepare Kings Langley lock where I found the lock full, gates open and another wide beam community boat with a panicking Captain. They had stopped the engine whilst filling the lock and now it would not start. As there was another boat waiting below to ascend I suggested they pull the their boat into the lock  using the ropes  whilst I had a look in the engine ole to try and find out why it would not start. I lifted the boards, checked all of the electrical 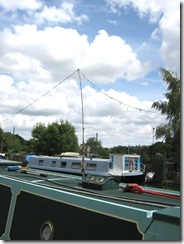 connections around the starter motor and then tried the key and it burst into life. Having finally tried the key myself, I suspect that he hadn’t tried turning it past the pre-heat section as it had a very strong spring against the start position. Whilst the very grateful crew went down through the lock and the waiting boat ascended, Caro negotiated for Parglena to overtake the second widebeam now waiting on the lock landing. This left us following the first widebeam and so I ended up setting for them at Hunton bridge, Lady Capel’s and Cassiobury until they turned round below Cassio bridge lock to return North.

BW have done some work at Kings Langley lock and so I do not believe it is the slowest lock to fill on the G.U. any more. Iron bridge lock now comes close to taking that title.

Before the community boat winded, it was ascertained that the  bow thruster was not working so the steerer wanted to use ropes to help the turn. I volunteered to take the centre rope around the 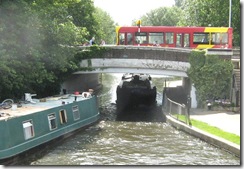 bollard to assist with winding. Unfortunately, a combination of the rope being thin and slimy and an old BW concrete bollard meant that I ended up with bad rope burn on my right hand.

At Common moor lock, whilst we were descending, nb Earnest crewed by Neil’s son Peter and a friend arrived to ascend. Nice to see Earnest out and about as I’m sure Neil is still busy with Maurice A in Eire. Just above Batchworth lock I spotted the best ever use I have seen a fishing rod put to. Much better utilised to support fairy lights that catching fish.

Posted by Jannock at 2:32 pm No comments: