A few pictures from this Spring 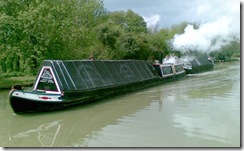 President and Kildare at Cosgrove 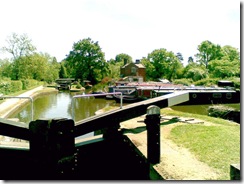 Looking back down Lapworth 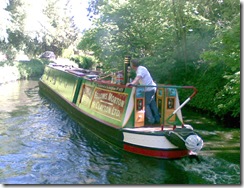 Adder passes us on the Northern Stratford 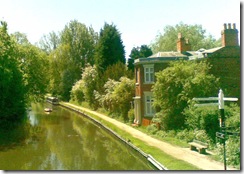 Doing a pumpout at Kings Norton

Posted by Jannock at 2:59 pm No comments:

What a difference the sun makes ;^)

We arrived at Jannock and I immediately moved the car to an easier parking location after unloading. Started her up and moved for 2 minutes onto the waterpoint to refill the tank and wash down the port side to try and remove some of the ash cloud that seems to have settled on our boat. Then off up the G.U. to Lapworth junction where we turned left and then right onto the North Stratford and the eighteen locks of the Lapworth flight that we had to pass through today. As we rounded the bend and approached lock 14 we espied two Alvechurch boats heading down the flight, the second boat was emptying it's lock before the one in front had started filling his and so a lot of water was being wasted over the weirs. We passed the first boat between 14 and 13 and then noticed the second was winding in the side moorings below lock 12 so we sat tight in lock 13 and watched with interest whilst consuming an ice cream I purchased from the shop alongside. They finally managed to turn and so we then followed them all the way up to above lock 6 where they moored up for lunch. One of their crew obviously felt guilty about the delay and so he back emptied for us to make the road slightly better. There was a definite shortage of water above lock 10 with the bottom being too close to the top even for Jannock.

It was a really beautiful day weatherwise. Brenda had never noticed before how luscious Wisteria smells when in full bloom. Amongst all the meadow flowers I spotted a Jay in bright spring plumage. We finally moored for the night just after Earlswood MYC in the wooded cutting, immediately below an Oak tree. A very peaceful mooring with plenty of wildlife to watch whilst relaxing in the cool of the evening. No sign of the badgers in what looked like a sett in the opposite bank before I finally retired to bed.

Blimey - two dry sunny days in a row, this must be summer 2010. An un-eventful day's cruise, after sweeping all the caterpillar droppings off the roof, with a self pumpout at Kings Norton being the highlight of the day. Even the fishermen were pleasant, especially the one who hauled in a goodly sized fish immediately in front of us as we passed him. Wasts Hill tunnel was wetter at the Southern end although the steerer didn't resort to a brolly like Braunston. Finally moored up on a 14 day mooring, after a pizza lunch on the move, and I returned to Lapworth on the Di Blasi to fetch the car whilst Brenda packed and tidied ready to go home. Wouldn't it be nice if this weather stays for the bank holiday weekend next week - I quite fancy a day at Crick, haven't been for many years now.

Posted by Jannock at 6:41 pm No comments:

Having settled in on the Friday evening by playing 5 games of Soddit before retiring to bed the crew of three (yes, we are missing one abscondee) stirred into action with a couple of bacon sarnies before setting off from Long Itchenden towards Warwick. We shared the first six locks with a Canalboat Club craft but then changed partners when it's crew decided to stop for breakfast. Luckily there was a single boat (Victoriann) following us down the locks so we waited and let them join us for the last three locks down to the bottom pound. We stopped for lunch and a session of non-contact fishing after Bull bridge and then continued on through Leamington and Warwick to the Cape locks which we passed up through solo. Above Cape we paused for a short chat with Kev Day who was moored on the visitor moorings there, we met him last year on the BCN Explorer cruise. As we were quite early we decided to start ascending the Hatton flight (last completed by Brenda and I in 2007) and passed through the bottom lock solo following a solo hire boat who was in the lock above. I sent Ian to let them know we were following and to try and get them to wait but they were chasing their friends who were also going up solo one lock in front. They paired up and having followed them up three locks we decided to stop for the night above lock 30. Whilst waiting for dinner to cook the evening entertainment was provided by Saffron the spaniel who, ignoring her owner, leapt into the canal and proceeded to chase a mother duck and her brood of 13 ducklings up and down the pound until she wore herself out. Throughout this Saffron's owner was desperately trying to coax the single minded dog across to the bank to haul her out  but Saffron was having none of it. She finally gave in and submitted herself to the bank to be un-ceremoniously dragged from the cut and taken home. We ate Paella (without Saffron in it ;^) and then played another 4 games of Soddit before calling it a night at 11:30.

I had intended to arise early and fetch the car from Long Itch. but the persistent rain on the roof at 5:30 and then 6:00 convinced me to stay in bed and collect the car later. As we untied to start the next 16 locks of Hatton flight I noticed a single boat coming up lock 30 and so we waited until Black Velvet joined us before making remarkable progress up the rest of the flight meeting only 3 southbound boats. As we ascended through the top lock Brian had Land of Hope and Glory playing loudly on Jannock's stereo much to the amusement of the gongoozlers present. We celebrated with an icecream from the cafe before passing, and saying farewell to, the moored Black Velvet crew and continuing on. Another rendition of Land of Hope and Glory followed by the Dambusters march saw us pass through Shrewley Tunnel with applause from a southbound boat. Crisis on the provisions front - the Vale beer supply has run out midday on Sunday. The only fish seen all weekend was in the Paella last night. We  moored up on a 14 day mooring and had dinner before I went and fetched the car. Surprisingly we had no rain all weekend other than that experienced during the early hours of Sunday morning although it could have been a lot warmer without that strong wind.

Posted by Jannock at 8:47 pm No comments:

What a difference a day makes

We arrived at Jannock during persistent light rain and so spent the first couple of hours sealing the joints on the new secondary double glazing. Once this was completed we set off in the drizzle and followed an ABC hireboat through Braunston tunnel. We smelt the booze aboard the second southbound boat we met before they had even reached us mid tunnel, they were partying big-time and making a lot of noise in the process. We shared the flight with the ABC crew - it was their first ever lock and so Brenda and I turned into instructors. By the third lock Brenda had their steerer running parallel with Jannock between locks whilst another member of their crew was setting ahead - Result! Out of the flight and through the melee of boats commonly known as Braunston till we espied Draco and Allsorts moored on the towpath together. We pulled alongside for a chat with Mike and Krystina for a while before heading down to the junction and turning left towards Napton. We moored for a very peaceful night, at bridge 102 near Flecknoe, after a very cold and wet day.

I was up at 6am and went to fetch the car from Welton to move it to tonights destination. We breakfasted on my return and then cast off in nice sunshine accompanied by a cold north easterly wind. As the sun got stronger and the clouds became fewer the wind also dropped - what a difference from yesterday. We did the top two locks at Calcutt solo but the boat in front waited for us to share the third lock with them. We though this bode well for Stockton flight but they announced they were returning to their mooring in Calcutt marina - shame. Today must be 'Charity activity' day because whilst we were descending the flight solo we had a charity bike ride coming up the hill and a charity "Hula" walk going down. We got into a good rhythm and completed the flight in 1hr 15 mins. We pulled onto the water point opposite the Blue Lias and enjoyed a chat with Sean, who was supposed to be painting Laplander, whilst the tank filled. We then went down the next lock and passed Virgo where there was evidence of the cat being at home but no Guy. We finally moored up on 14 day moorings ready for a Soddit cruise next weekend, had a meal and then headed for home.

Posted by Jannock at 5:50 pm No comments:

A veeerrry cold day in May

We arrived at Jannock and were off, heading North, by 9:45. By eck it's cold at tiller. There was a very strong northerly wind that cut right through and within the hour insult was added to injury by the first downpour. The weather forecasters obviously got it wrong when they stated Monday would be the best day for weather during the bank holiday weekend. We cruised up through Bugbrooke, Heyford and Weedon with very little to comment on until we reached Buckby locks. The boat that had been following us since Heyford decided to wind between Diamond bridge (19) and Muscot Mill Bridge (18) and so it looked as though we would be doing another flight solo. 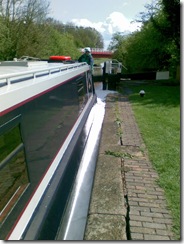 Every lock had lots of foamy bubbles floating in it which multiplied when the paddles were opened. Brenda discovered that if she squashed the foam between the boat and the offside lock wall she could shoot it about using the exhaust as she left the lock. We met three southbound boats but also had two downpours during the flight and my waterproofs were wet inside as well as out because I was so warm working the flight. Finally cleared the top lock by just after 3pm and moored up for the next four days. Did a Di Blasi run back to Gayton (17 miles) to collect the car and then had dinner aboard Jannock before setting off homeward.

Posted by Jannock at 7:26 pm No comments: