And back to the mooring.

During the night there was serious consideration given to the thought of a new boat – nb Noah’s Ark would have suited. Yet, by 6am the rain had stopped, the sun was out, all that was needed was a Dove to presage World Peace.

I had a lie in this morn 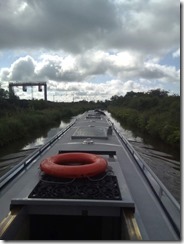 ing and he didn’t set off until 8am. Brenda remained in her bed awhile and then thought about getting up at 8:30. Apparnetly there’s a lot to be said for a warm bunk after listening to the rain on the roof all night. We had a very unusual passage through Ansty – we didn’t meet anyone coming the other way at any of the bridges.

Down the straight towards Kate boats, I like to wave to trains along here to see if I can get a response from the driver. Something the kids used to do during family boating holidays. Always pleasing to be acknowledged by a blast of the two tone horns. Through the swing bridge, which was opened for us by a kind crew member off the Anglo Welsh hireboat to be greeted by the sight of Kate Boats new weather proof cover to the wet dock. This looks like it’s been manufactured using the left over sides from a hireboat being converted into a dayboat but I suspect that would make the shelter too heavy.

On entering Brinklow marina, Brenda hopped ashore to walk to the end of pontoon 9 so that I could spot where we needed to be to moor up. She had to avoid ‘duck do’ at the start of the pontoon so was keeping her eyes to the walkway to avoid treading in it. The wind was causing large ripples in the water moving at 90 degrees to the pontoon. Forget sea-sickness and ‘mal de debarquement syndrome’, She had an attack of windy pontoon nausea and couldn’t get to the end of it. She became so unsteady that she ended up clinging to an electricity bollard. The pontoon wasn’t wobbly but she certainly was. I brought Jannock in to a perfect docking because none of our neighbours were on their mooring so I had plenty of space to play. Having done it now, I spotted the next pontoon has a number 8 on the end and ours has a white fender so that’ll help navigation next time.

I went on the Di Blasi to fetch the car from Huddlesford (35 miles) whilst Brenda had a cup of tea and a lay down. That’s her excuse and she’s sticking to it. Sail boats on the Aegean? NO WAY!

Posted by Jannock at 7:34 pm No comments: