The rain didn’t arrive till late.

A late start today due to domestic matters at home and a gloomy weather forecast – which turned out to be late anyway!

I cast off Jannock and we set off south from Hartshill whilst Brenda was unpacking and preparing lunch inside. Although there was quite a stiff breeze it only affected us when we slowed down to pass moored boats where there was no shelter provided by trees or hedges. The plan was to try and get as close to Hawkesbury as we could before mooring up when the forecast rain set in. On the approach to Nuneaton we happened across a fishing match but unlike the Milton Keynes ones, there were only 9 participants here.

Just after Wash Lane bridge there is a large blackberry bush, on the offside near the allotments, that was smothered with large juicy fruit so we stopped Jannock alongside and harvested as many as we could before another boat came along and we had to move on due to the bows having swung across the canal effectively blocking it. The, long closed, Navigation Inn alongside bridge 14 is undergoing a major renovation but I suspect it is not destined to re-open as a pub again.

We moored for the night, just before Hawkesbury junction prior to the forecast rain starting. We ate most of the harvested blackberries for dessert accompanied by tinned rice pudding – they were excellent. In fact they were so nice we suspected that the bush was originally cultivated stock that has escaped from the allotments next door and not a run-of-the-mill wild bush.

Posted by Jannock at 4:37 pm No comments:

Is this really Atherstone

After a slimmer's breakfast, only half a sausage each and half wholemeal rolls with our egg, mushroom, marmalade and Stella’s Gooseberry and Elderflower jam (purchased at Stafford Boat Club) 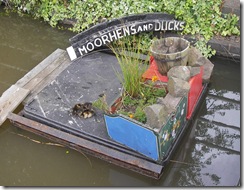 we tackled the Atherstone flight. Accomplished in 1 hour and 57 minutes with every lock in our favour, no rain and nothing horrible happened. Finally the Hex has been lifted. The duck platform floating in the side pound alongside the top lock amused me. Not sure where mum was but the ducklings were enjoying a snooze.

Fashion tips for chaps – let us consider the onesie. Not really sportswear or outdoor clothing, so why? This morning we met a wolf! I hope he didn’t get his tail caught in the paddle gear. The onesie, you think you look cool in the dressing up clothes you knew you were to grown up for when you were 9.  At least this one was wearing shoes unlike the last one we saw. Mind you, is there a Hippopotamus one? I have the right figure for it. Pink tutu – Disney’s fantasia. Darcy Bussell eat your heart out.

We moored up and were serenaded by the sounds of an amateur American marching band practicing over the hedge. The marching and flag twirling looked quite professional, shame about the accompanying music. Luckily practice only lasted an hour.

P.S. If any regular readers use our Jannock at lavabit dot com email address then please delete it as Lavabit have stopped operating after an argument with the American authorities about releasing email contents.

Posted by Jannock at 6:51 pm No comments:

We moved onto Jannock last night and awoke this morning to the sound of very noisy ducks. They were running along the surface of the canal, very similar to swans trying to take off, whilst quacking very loudly. I wondered whether this is a new sport in the ‘Duck Olympics’ that they were practising for.

That apart, nothing much happened today, but in a good way. At Hademore, Graham noticed some odd concrete contraptions alongside the new road that passes over the railway via a new bridge. What are they? His guess was that they were medal awarding platforms left over from the Olympics as they seemed to be three concrete blocks formed into a 1 – 2 – 1 step format. Brenda thought they were viewing platforms, with handy handrails, to allow railway enthusiasts a better view of the trains. further along the canal and another set were spotted, this time with a road sign that made it all clear. Health and safety on the roads – they are equestrian mounting blocks because horse riders must dismount and lead their horses across the railway bridge. Wouldn’t want litigation after someone gets thrown by a horse frightened by a Virgin.

Best dressed boat of the day was at Fazely, the Maid of Fibre, a cruising advertisement – it was clad in brightly coloured balls of wool. Must be warm in winter.

At Alvecote marina there was a lovely row of working boats all moored end on to the wharf. Must be a rally happening soon.

It’s been a long time since Brenda commented on fashion tips for chaps – but today the debonair boater was wearing a top hat and tattoos. Quite a look.

We continued on to Bradley Green bridge where we stopped and Graham did a car shuffle on the Di Blasi. On his return we ate dinner and then moved up and moored close to the bottom of Atherstone lock flight ready for tomorrow mornings ascent.

Oooops we forgot the 28th July

It rained for 7 hours last night to our knowledge, hard and fast with thunder and lightening. We assume there was more but we fell asleep to the constant drumming on the roof. So, it seemed counter intuitive to awake to find G drilling holes in the floor. Noah did stuff with doves and ravens, not holes in the floor. But Noah didn’t have a fridge that struggled for cooling air in an unusually hot summer. We hope it will now be able to pull cool air from within the bilges and settle down, especially at night. A fridge in a fit is a noisy thing.

Sunday, Fradley junction, hassle! The volunteer lockies were at middle lock, ensuring folks an easy and quick passage into mayhem. We turned onto the Coventry and stopped to fill with water as soon as we were through the swing bridge. Jannock shooting across into a vacant water point threw the approaching boat into a bit of a panic – calm down dear! We the continued on under the A38 bridge and past the nice house at Brookhay which is due to be sold during 2014 (so the sign outside says) – too near the main road and a railway line for  our taste. The mini arm cut into the front lawn looks ideal for a mooring though.

We finally moored up at Huddlesford with the plan of eating at the Plough before we set off homeward. Car shuffle completed and boat tidied and locked up, we arrived there at 3:15 to find that they stopped serving food at 3pm. We noticed Andrew Denny aboard nb Granny Buttons moored on the 48hr moorings there so we stopped for a chat and catch-up before heading south in the car in search of dinner.

Posted by Jannock at 6:43 pm No comments: