A good workout at Stoke Bruerne

We arrived at Cosgrove just after 10am and I prepared Jannock and moved her up to the lock whilst Brenda chatted to the couple bringing their hire-boat down. Once traversed we then pulled Jannock over above the lock to load the Di Blasi and the Polycarbonate sheets for the secondary double glazing we are installing. The suppliers originally supplied 3mm Makrolon panels but they had been stored badly before cutting and were so bent that the magnetic strip designed to hold them in place over the window frames could not keep them there due to the warp in the sheets. They have since supplied a replacement batch of totally flat 4mm panels which should do fine. 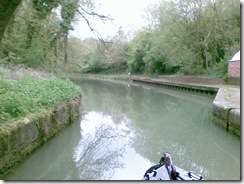 We travelled on past Thrupp and Yardley wharves (and marinas) to the bottom of Stoke Bruerne flight of locks. The first set of five (16 - 20) were traversed alone with me having to close the top gates and empty every lock so that it was ready for us. As I arrived by bike at No 15 another boat was just entering and so we shared the last two with them. I'm not sure whether it was them that were ahead of us during the first five as they were moored around the corner when I checked for southbound traffic before turning No 16. All in all the flight was a good work-out and I actually feel tired tonight. On through a very wet tunnel to emerge the other end into a very wet grey landscape so Brenda, having steered her first long tunnel since she 'came over all peculiar' in Wasts Hill several years ago, went inside to keep dry. The rain stopped and the sun came out just before we decided to call it a day and moor up.

I returned to Cosgrove on the Di Blasi and collected the car. We then fitted all the Makrolon panels onto their magnetic strip fasteners and then fitted them to the window frames. We immediately noticed a big reduction in noise from outside so look forward to seeing how well they work in colder or warmer weather. Home this evening due to other things to do this weekend that do not involve getting wet on a boat ;^)

Posted by Jannock at 8:54 pm No comments:

Well, one out of two aint bad!

We arrived at Jannock and immediately moved up onto Slapton waterpoint to fill the tank whilst unloading the car at the same time. We then set off through Slapton lock and arrived at Church lock just after a single handing lady had left ahead of us. We then shared Grove and Leighton lock with her but did Soulbury three solo as she had paired up with a Wyvern hireboat ahead. Between Leighton lock and Soulbury Brenda managed to disturb a very well camouflaged tabby cat who was enjoying a snooze in the sun by casually tossing her pear core into the hedge where it landed on the mog's head. Did it jump!

As we passed the layby on the Bletchley to Stoke Hammond road we picked up a fisherman's tackle on the prop. His reel was squealing and as he was a novice he didn't know what to do. We stopped and untangled his line from the propeller without breaking it. All of the fishermen there were very apologetic about ruining our afternoon. It was funny because it was his first catch - all 62' and 15 tons of it! We moored for the night just past the proposed MK to Bedford waterway junction and so we went for an evening walk along the signposted route and back past Willen lake. A wonderful day with warm sunshine and nice fishermen.

Rain in the early hours modified my plans for a pre-breakfast car shuffle on the Di Blasi whilst Brenda slept in.  She'd promised the weather gods that she'd not be cruel to neither man nor beast, cat nor fisherman today. Did they listen? No they just did cold and wet until we finally moored up for the day - then the sun came out. 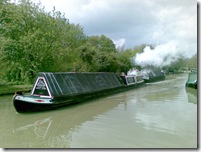 We were pleased to finally say Hello to Mike Askin as he passed on a resplendent Victoria en-route for Canalway Cavalcade. Hot on his heels ( in canal terms obviously ) were President and Kildare, bound I am sure, for the same destination. Then Bletchley and Argus went past Northbound before another working pair, Kestrel and Vienna, passed by heading South. It was definitely 'Working Boat Day' today. With car fetched from Slapton, we closed up and headed home. Roll on next weekend cos it's a long un!

Posted by Jannock at 4:40 pm No comments:

It must be weird living near Heathrow at the moment!

Saturday morning we moved our stuff onto Jannock, said farewell to Julian and Caro and set off North for the summer. 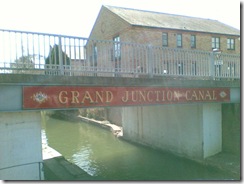 We travelled solo up to Berko where I admired the new signs that adorn the bridge adjacent to Raven's Lane lock. We then followed two boats working up ahead of us through Northchurch, and Dudswell locks but they were kind and backset for us when no-one was coming South. The trip up to the summit was made much more pleasant due to the amount of work that BW has done to the overhanging vegetation and also the lock gates. Onto the summit and a well earned rest for the lock wheeler. The new gel-cover for the bike saddle is excellent. We turned into the Wendover arm at Bulbourne Junction and made our way down to the winding point where we moored for the night. The last couple of times we have stopped here the noise from the aircraft using Luton has been quite intrusive, this weekend it was wonderfully quiet with only sheep and frogs making any noise. 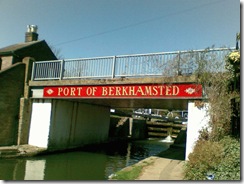 Whilst moored for the evening I fitted my new large Cutweb stickers to the bows of Jannock, and I am very pleased with the result. Not quite as good as Harnser's painted ones but maybe we'll do that next time.

Sunday morning started bright and sunny so we set off for the Marsworth flight. The wind decided to hinder Brenda's attempts to get Jannock round into the top lock from the arm and so I had to assist with the long pole. We shared the next eleven locks with a Wyvern hireboat until they decided to stop for lunch. Aviation is still grounded and so the skies are owned by the skylarks. After we had moored, I did the car shuffle on the Di Blasi and returned in the car for Sunday dinner. We then returned home via Aylesbury. A wonderful weekend in great weather. 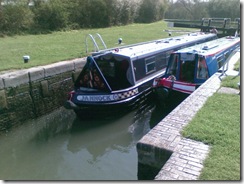 Posted by Jannock at 8:38 am No comments:

.. and so it's time to turn Jannock round. We arrived at the mooring just in time to find Julian and Caro setting off North in Parglena for a weekend trip to Berko. I then washed the winter off of Jannock's roof, also did the port side, rear deck and front well before we cast off for our regular trip down to Winkwell winding point to turn her around. Nothing much to report, we did all the locks solo and Brenda performed her best turn-around so far. It does help when you haven't got some jerk moored on the winding point like last year. Back up through locks 61 and 60 without issue. Took great delight in holding up a youth in his souped up Peugeot at Winkwell swing bridge, he just kept revving the engine making a lot of noise while he waited. As I was walking up the towpath from 60 towards lock 59 I noticed that the canal is leaking water quite badly through the bank into the river below about a third of the way up. I have notified BW of my observations so hopefully they'll send someone along to have a look before we get a full scale breach. Back to the mooring to wash the starboard side so she's all clean ready to start the 2010 cruise. Back home tonight as we have a birthday related event tomorrow. If we're lucky we might set off North next weekend.

Posted by Jannock at 7:27 pm No comments: