Fathers Day on the Stour Cut

We left a nice clean shiny Jannock at Stourport last weekend and in the week it rained. We arrived to find a really dirty Jannock. It's not 100% water ,that rain, it's 30% mud I reckon.

A beautiful day with the addition of a cooling wind. The canal and it's countryside corridor is very pretty hereabouts and we've awarded Kidderminster the most aesthetically improved town since 1999. OK, the improvements are basically retail parks and housing estates but they look better than the decaying industry that bordered the cut when we last passed through. However we still mourn the demise of manufacturing industry in the UK, those that spawned and were serviced by the canals we love. Some of the old canalside buildings have been re-styled very well. Kidderminster lock took the art prize. There are superb murals depicting a young male face of the 20s, 40s, 60s, 80s, 2000 and 2000+ all along the wall under the long bridge before the lock. Watch out Banksy! 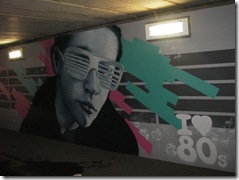 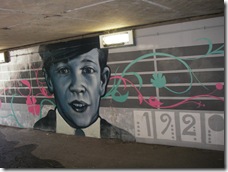 I have dug out a photo taken when we did this route in Lacewing during 1999, the last year we hired before buying Jannock and have put it here with one taken on Sunday. 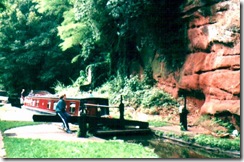 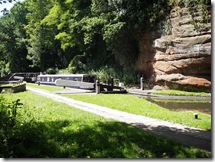 We continued North passing through some quite deep locks (I didn't remember them being that deep) and moored on a 14 day mooring so that I could go and fetch the car from Stourport. On my return Brenda had prepared dinner and so we ate, washed up, closed up and set off homewards. A crying shame as the weather is so nice at the moment.

Posted by Jannock at 6:23 pm No comments:

A bit of river for a change

You know you've been busy when you find yourself updating the blog for last weekend on the Friday evening of the following weekend - Oh well, I can blame 3 days in Glasgow and a funeral for that.

Today, Jannock has mostly been attacked by an ASBO swan defending his mate and new brood from the nasty narrowboats. 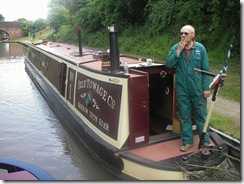 We started off from Oddingly and almost immediately came across Idleness moored just south of bridge 25. I spoke to the skipper who asked me to pass on his best wishes to the last owner when I next see him. It was then between the two Bilford locks that we came across the angry father of 3 very young 'ugly ducklings'. Not content with hissing and biting the rear fender he took to flapping down the cut like a demented ecranoplan and then gaining enough height to swoop down at the steerer who was suitably scared.  Definitely an example of extreme family protection duty. Having survived that we continued down into Worcester and joined a queue for Blockhouse lock. I spoke to a BW guy there, who was cutting the towpath hedge, and enquired about the provision of 14 day moorings in Worcester. 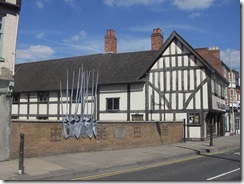 He advised that the only suitable moorings were here immediately above the lock and so we reversed Jannock past the three boats already on the moorings and pegged in up stream of them. I then went and fetched the car from Oddingly whilst Brenda went to mourn the Royal Worcester works (still cursing because she didn't have time to do the tour last time we were here in 1999) and wandered into the  Commandery shop. A ceramics artist and lecturer was demonstrating his technique there but due to a lack of customers Brenda managed to get a one-to-one demonstration as well as a good long chat. Whilst I was driving back to Worcester in the car I spoke to Matt and arranged for him to feed the cats overnight so that we didn't have to go home. I then continued on to a handy car parking spot at Ombersley, half way to Stourport, and returned to Jannock on the Di Blasi again. Brenda quickly accepted the change of plan as nice weather was forecast for Sunday. In the evening we went on a walk around Worcester finishing up in an excellent Thai restaurant for a meal before returning to the boat.

We awoke from a good sleep at a quiet mooring and set off down through Blockhouse and Sidbury locks into Diglis basin. 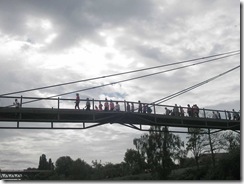 As I was setting the top lock a CanalClub boat cast off and joined us down through both locks onto the river. We entered the river just as the rain started, not too heavy but just enough to dull Brenda's pictures of Worcester from the river. Well done to all the cheery souls who were doing a 'Walk-for-Life'.  A lovely sea of Pink. Ooh-er missus - quote of the day! Brenda saw a group all dressed in tu-tus & bunny ears and said she'd like to get a photo of them as we passed under the bridge. My comment - "you can take them from behind!" and then I was confused because she laughed so much! We had a lovely day on the river including being over taken by a ladies coxless four at full pelt. Once we passed through the first lock it became fairly quiet boatwise and we shared all next two locks with the CanalClub boat as well. After leaving the last lock, following our partner, a large gin palace pulled out from its mooring and rushed past both of us towards Stourport. When we arrived at the entrance of the Stour cut, who should we find moored on the lock landing? Yes Cap'n gin palace. Brenda eased Jannock's bow into the bottom gates so that I could jump ashore and start setting the lock. 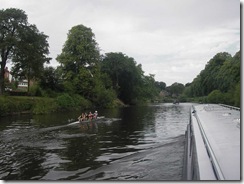 I then spoke to Cap'n gin palace pointing out that there was another boat approaching who would need to stop on the lock landing. He pulled his boat back about 4 foot and then sat there drinking whilst watching the poor CanalClub boat flap about in mid-stream until Brenda took Jannock into the bottom lock and he could bring his boat up to the bottom gates. It was lucky that Mr CanalClub had more experienced boaters about as he had not come across a staircase lock in his previous 8 years hiring and started lifting paddles before we had left the lock he was emptying. We navigated our way through the basin to find another boat (narrow this time) moored on the lock landing for York Street lock right alongside the "No Mooring unless........... " sign. We just managed to get in front of him but let another boat who had just finished watering up on the opposite bank go into the lock first. Whilst we waited for a southbound boat to descend the owner of the narrowboat on the lock landing then took his dog for walkies whilst our CanalClub friends were once again floundering about trying to find somewhere to wait for the lock. As Jannock ascended the lock the aforementioned illiterate boater, and his dog, was sat enjoying a cuppa in the cafe garden alongside the lock. One word sprang to mind!  Ho hum!  We pulled over to moor on a 14 day mooring just as the weather failed us and the heavens opened. Luckily it stopped by the time I was ready to fetch the car from Ombersley.

Posted by Jannock at 7:09 pm No comments:

We were only doing Saturday on Jannock this weekend and when we arrived at Stoke Prior I parked the car near the lock to make loading the Di Blasi onto the boat easier. We walked across the yard to find Jannock now had two more boats moored offside of her. We opened up and prepared to leave and then extricated Jannock from within the other two boats without the lass doing the turn-round on Robin (the most offside boat) even realising what had happened. Another Black Prince boat was ascending the lock and so Brenda expertly reversed back to collect me once I had secured the other two boats into our vacated slot. Having said our farewells to John Lucas at B.P. we then passed down through Stoke Bottom lock and set off towards the Astwood flight. Past Stoke Works where Jannock was built by J L Pinder & sons back in 1996 and straight into a fishing match. Fortunately there were only about a dozen rods of a very pleasant disposition which was a rare treat as they chatted and joked with Brenda as we went past them. The trusty lock wheeling bike was brought out to speed us down through the flight picking up a dozen free range eggs for £1.50p at the lock keepers cottage en-route. On past Hanbury wharf and through Dunhampstead tunnel before finding a suitable 14 day mooring and pegging in. It was at this point that I realised that I had not loaded the Di Blasi onto Jannock whilst passing through Stoke Bottom lock and so I had to cycle the 6 miles back to the car to fetch it. Not a good thing to do on such a warm day but luckily we hadn't travelled further.

Posted by Jannock at 9:02 pm No comments:

We went to Crick show by car for a day out. What a change to do it in the dry weather.  No queues to get in 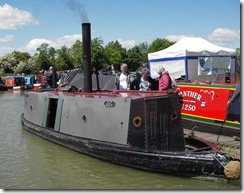 and then was asked by Sean to steer Laplander for a couple of test runs up and down the marina before he got all the Presidents men to come and play. Luckily I was wearing a white T shirt under my nice white shirt so I stripped off the top layer to let the T shirt cope with the inevitable smoke stack smuts and then changed again afterwards so that I didn't look too spotty whilst visiting the rest of the show. Didn't spend too much money but got some good ideas.

With the able assistance of our neighbour Bob we have mostly been descending Tardebigge flight. We left Alvechurch and passed through the two tunnels before arriving above the top lock. I have done this route before but never really noticed how the 580yd Tardebigge tunnel is mostly unlined with bricks being carved out of solid rock. I'll make sure I've got a good torch alongside the steering position when we next pass through to get a good look. 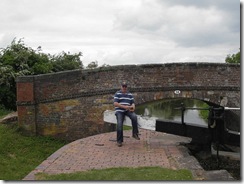 We had a good run down the 29 locks in the flight following two other boats so Bob elected himself as lockwheeler and went ahead setting the next one ready whilst I worked Jannock through. A pause for a boat ascending the flight allowed us to eat the pre-prepared lunch and completed the flight in about 3 hours meeting a total of three boats coming the other way. We wanted to moor below the flight but the towpath was very wet due to excess water overflowing from the cut so we continued on down through five of Stoke Prior flight. As we were filling the bottom lock I popped into the Black Prince office for a chat with John Lucas who immediately offered us a mooring for the week in his yard. Now that's what I call after sales service as it is now almost 10 years since we bought Jannock (previously Powys) from him. 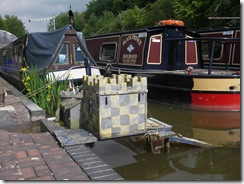 Brenda was amused by the Duck castle located in their yard, fit for any MPs property! We ate dinner before closing up and heading home once I had fetched the car from Alvechurch.