Posted by Jannock at 8:37 pm No comments:

Time to catch up.

Life has been very busy and so the blog has got behind a bit. Time to catch up.

Having arrived at the boat on Friday night, we made a late start from Hartshill due to the drizzly rain which persisted until after 10am. We set off as soon as it eased and made our way towards Atherstone. At the top lock there was one boat waiting to descend and so we pulled in behind them. The volunteer lockie was working boats through the top lock and allowing  crew members to go ahead to set the next. As there were plenty of boats going both ways this created a steady flow through the flight. We decided to pull over after the fifth lock for lunch as we seemed to be playing catch-up with the boat in front. Good move as the heavens opened whilst we were eating so we waited, once again, for the rain to stop before setting off. We continued down to Bradley Green where we winded just past the wharf, returned to do a loo pump-out and water fill, then reversed back through the bridge to wind again and continue our journey North. As we tied up at the wharf the heavens opened again – must be ‘cup-o-tea’ time declared Brenda. We continued on through Polesworth to moor up for the night opposite Pooley Hall – owned by Edwin Starr until his recent demise. We know how to live the pop star lifestyle (we may know how, we just can’t do it) We’ll have to settle for being Grade 2 listed certified then!

Happy fathers day!  An un-eventful day with sunshine and very blustery winds that pushed Jannock about at in-opportune moments. At Glascote locks we followed another boat down through with two boats ascending at the same time, luckily the adjacent buildings kept the wind off the canal so waiting in the pound was trouble free. We were surprised to find lots of empty moorings at Fazeley, usually this place is very busy. Hopwas, on the other hand was full north of the school. We continued on through Whittington to moor on a 14 day mooring at Huddlesford. We really needed to find somewhere to leave Jannock for three weeks due to family commitments but decided on Plan B instead.

We arrived at Jannock just before 10:30 and immediately set off Northbound. We then winded in the entrance of the new marina, just before Streethay and set off back towards Whittington. Having not been able to identify any reasonably priced moorings for our three week break, I took a day off work to move Jannock the day before we travelled to Switzerland to visit Simon. We tied Jannock up on another 14 day mooring at Whittington, locked her up again, and set off back home to load up the car for our pan European experience.

Simon arrived from Switzerland with a novice crew, Alyssa, Dani and Sebastian, for an ‘exotic’ holiday to Birmingham. Arriving on Saturday night, they grimaced at the overnight downpours and morning rain but . . 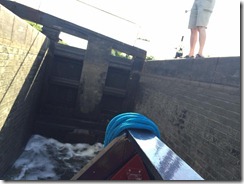 crew’s mood up with coffee and tea. The crew is introduced to basic driving of the canal boat. By lunchtime we are hitting (heading? ed) for the first lock, Curdworth bottom lock.

(Daniel) After practising with the lock we are hitting the road – uhh! the canal again. Earlier we had passed a disco boat which was having a rave in the military firing range. After a few more hours of boating and ten locks we found a cosy place to stay in Curdworth. Having a nice dinner in the White Horse pub was the perfect end of this sunny day.Our sunburns were treated with drinking cold English beer.

(Alyssa) Full of our Sunday roast dinner and pudding in the White Horse Curdworth, we headed back to Jannock for a few Shambats – they were lovely but no explosions. It was totally robbed of a prize.

(Alyssa) After bacon sandwiches in Curdworth we set out towards Birmingham. There were a few big (sore? ed) heads, as it turns out that Southern Comfort is less comforting the morning after. We had a few more locks (with some more driver training) before passing the M6 and starting the real work of the day.

(Simon) Shortly after Salford junction we started up the Aston flight of 11 locks and put our novice crew through their paces for the first time. Within three locks the crew were rotating drivers and a lock wheeler was working ahead to set the next one. The task became easy as the routine was honed. Cheerfully we passed through number 11 and arrived at Aston junction, but there was no time yet for a celebratory beer. The test of the day was still to come . . . and two members of the crew still had sore heads.

(Sebastian) So we started the run for Birmingham (hill) which means only 13 locks left. No problem for the experienced crew under the command of Sir Lt. Com. Dr. S Keens. Two times it was necessary to pull the boat aside as other boats were coming down. One boat realised at 5pm that it was time for a tea break, while other boats were lined up behind and waiting for the locks. Finally we arrived in Birmingham centre. Time for good Indian food (not too spicy, just right) and we ended the evening in the Figure of Eight (Wetherspoon) on Broad street. After that we wanted to have a last beer at the boats mooring pub (Fiddle and Bone) but they were closed when we got there. 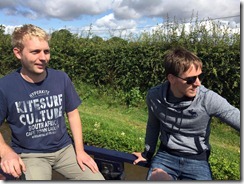 (Simon) Sebastian, over the course of the day, restricted himself to lagers and then ended the day with a Southern Comfort. All in the name of science as he wanted to see if was the English beers that gave him a hangover yesterday. Conclusion – English beer. (Personally I think it was down to sunny day dehydration myself!)

(Alyssa) After a morning of sight seeing and shopping in Birmingham (and enjoying some more sunny weather) we head back to Jannock for some engine maintenance and a pint at the canal side pub, Fiddle and Bone, whilst we wait for Dani. It was an easy and quick afternoon of cruising – only a few hours and only 3 locks. The crew was getting excited because it was our first staircase lock. We arrived in Tipton and found a mooring at the park honouring “the Tipton Slasher” – who we were happy to realise was not a serial killer but marginally less worrisome, a bare knuckles fighter. We found the nearest pub for some pints and some Soddit – much to our Captain’s delight we were not driven out of town for being a gang of dirty foreigners!

(Sebastian) The morning started with a relaxed British breakfast. Then we 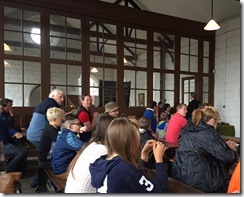 went to the Black Country museum. As a recommendation of our Captain we had to eat Fish and Chips, very fatty but good. The museum gave us a good impression of life about 100 years ago. Leaving Tipton at about 4pm we went through 3 locks for Netherton tunnel. It is about 3Km, which is quite impressive. By the end of the 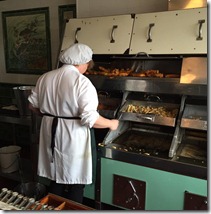 tunnel we pulled over for water. We then followed the curvy canal for a few miles and finally reached Merry Hill. We then went for dinner to the Wharf pub and then had a last beer at the Wetherspoons next door. There, we figured out a special breakfast offer for £3 so breakfast for tomorrow is already prepared.

(Daniel) In the early morning we went for the pub again for having breakfast. The ones who are not really used to a British breakfast were 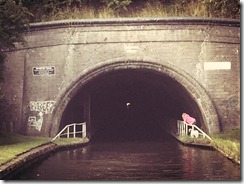 really full afterwards. After that we all went shopping in the Merry Hill shopping centre. Basically we were shopping for BBQ food for the evening.

The crew is ready to start the trip for today around midday. We had a lot of locks to work. First a set of eight and then another set of sixteen. We shared the driving of locks pretty fair : Daniel 8, Alyssa 8, Sebastian 8 and Simon nil.

In the evening we had a really nice BBQ right next to a lock. Steaks, sausage and salad and then playing cards until darkness. 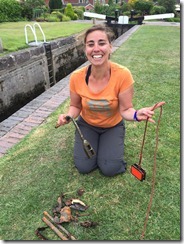 (Simon) Postscript : having retired back into the boat , we dumped the rubbish from the BBQ in the front well, and moved inside as it was getting a bit chilly. Whilst watching Family Guy, there was a strange hissing & crackling sound outside. I opened the door to find the front well in flames. OMG! WE SET THE BOAT ON FIRE!

(Alyssa) Thanks to some quick action from our gallant Captain, the fire was quickly extinguished with only minimal damage – if quite a mess was made with the powder fire extinguisher.

(Simon) Oh dear! Catastrophe averted but I will retain my 100% friend-cruise accident record . . . .   Matt (my brother) is obviously a far better prospect.

(Alyssa)  Rain, rain go away . . . We watched Dambusters while it rained, 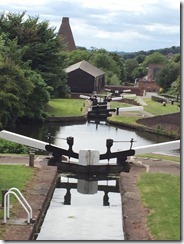 (Sebastian) We started after an (last) English breakfast. Some locks today. The most impressive lock – The Bratch – 3 locks in a flight (15m).

We went for a ‘pump-out’ to the Shropshire Union canal since the other boat yards were not offering the service. So we took the stop lock to visit the boat yard.

(Simon) After pumping out – and the acquisition of some brasses for Jannock, by way of absolution for the fire! – we reversed back through the stop lock and continued up the Staffs and Worcester to Coven, for easy pickup and return to the airport tomorrow. In preparation for Mum and Dad’s cruising back into Birmingham via the Black Country museum, Jannock was winded and reversed into her final mooring position . . . right on top of a wasp’s nest in the bank. Simon valiantly got stung in order to discover the nest location and warn the others . . .  He didn’t scream and shout and swear at all. What a hero!

A pleasant evening was spent indulging in a final meal in the Fox and Anchor (highly recommended).  Back home to Switzerland tomorrow. A good time was had by all! Thank you Jannock. Sorry about the burns!

Posted by Jannock at 5:58 pm No comments: