I've been so busy recently that I forgot to post the report for two weeks ago - Ooooops!

It was raining when we arrived at Jannock and so we took our time preparing for the off and finally pulled the pins at 12:15. We immediately found ourselves 'piggy in the middle' in a three boat convoy until Cap'n Slow stopped at Gnosall. Brenda declared today to be 'National Peering into Windows Day'. A young girl passenger on a southbound dayboat exclaimed "They've got beds in their boat - it's not fair because we haven't" as they passed. We continued onto Norbury wharf where we stopped for diesel (59.9ppl plus tax at whatever rate you want to declare), a pumpout and a waterfill during which another gongoozler inspected inside every window from stern to bow exclaiming "this boat is just like a small house, it's even got a kitchen".  That is the problem with large windows on a narrowboat which I'm sure porthole owners do not suffer from. The BW service block at Norbury is excellent with ironing board, shower, loos and a bookswap.  We then continued on to Bridge 42 at High Offley so that we could pay our first ever visit to the Anchor where we spent an enjoyable evening with the locals which involved stories and songs, mostly about the Anchor and themselves.

We continued North out into the countryside, across Shebdon embankment until we found a suitable 14 day mooring where we pegged in and I then went to collect the car. Brenda had done a meal which we ate on my return before loading all of our stuff into the car ready for the homeward journey.

No. 2 son, Matt, and his crew will be using Jannock for the first week of August when they intend to travel up to Barbridge, across to Middlewich and then head South down the Trent and Mersey. Say Hello if you come across them and let me know if they're not behaving themselves. Also keep your biscuits hidden ;^)

Posted by Jannock at 7:00 pm No comments:

On Monday Brenda and I travelled to Woolhampton for an evening meet up with Bruce and Sheila (nb Sanity Again) in order to deliver some papers, enjoy a pint in the Rowbarge and inspect their new home. We had a great evening of chat and catch-up which ended with a cup of tea before we left for home and my early work start on Tuesday morning.

Wednesday we collected Matt and drove to Salford 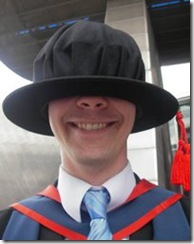 for son Simon's (pictured) second graduation at the Lowry centre. Pomp and ceremony over, we headed into town for a meal and then walked through Castlefields on our way to Knotts bar to top up the beer levels. We spotted nb Gecko moored in the basin with no-one aboard. I tried ringing Peter but no reply so left a note in the cratch and sent him a text. This was responded to and so he and Margaret (aka She Who Must Be Obeyed ;^) came and joined for a chat before heading back to Gecko after an evening on the town.

Back to boating on Saturday, our last before Matt uses her for a holiday with his mates.

Posted by Jannock at 7:29 pm No comments:

Sorry for the re-post

I deleted a lot of spam from the Blogger site in-box and managed to delete the latest post - so I've had to repost it!

In response to the comment posted by Tom - thanks for the info about Selly Oak hospital. Unfortunately your comment was deleted when the linked post went into the void.

Posted by Jannock at 3:18 pm No comments:

I took leave today to get an extra days boating in but ended up volunteering to get a tooth removed after the previous three days of excruciating pain. Consequently we didn't leave home to travel to Jannock until 2pm.

We arrived and unloaded and set off North towards Kinver where we stopped to fill the water tank (the rest of the service block is still out of use). Although the boss reckoned I should be on light duties I decided to wash the towpath side of Jannock whilst we waited for the tank to fill - which included the removal of an extended family of slugs that had moved onto the blacking at the last mooring. We then moved out into the woods North of Hyde lock before settling for a night amongst the tweeting and shrieking of mother nature. So much for peaceful countryside ;^)

Brenda prepared an excellent meal of braised duck, saute' ed potatoes and crushed petit pois au Cannes (OK - tinned mushy peas) It was very scary as nigh on 20 ducks turned up and were definitely giving us the evil eye as we munched ours.

We awoke to a lovely sunny morning and set off after breakfast at 9am. 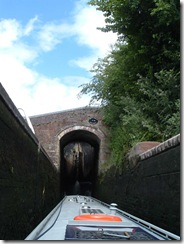 We had no queuing at any lock, not even the Bratch (Wow- turn up and straight in!), until we approached Wightwick lock below Compton. 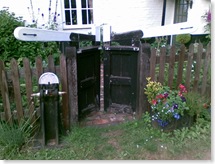 Here  we found a Hudson boat reversing back up through the lock as they had missed the winding hole above it. We decided to continue onto the Shroppie as we were so early rather than stopping at Compton as planned. At Oxley we said Hello to Orph but didn't see Wendy at all although Felus Catus II was open.

At Autherley junction Brenda went ahead to operate the lock and ended up joining a 'steering committee' of three people advising a newby hirer how to get his boat around the tight turn onto the Northbound S&W. Once through the stoplock we travelled up under the M54 and moored for the night on one of the S.U.C.S 48 hour moorings.

Bird of the day - a very splendid Jay

A quiet night, a quiet breakfast and then off. Most of the canal traffic today was Southbound and we were lucky to meet most in the pounds rather than in bridgeholes. 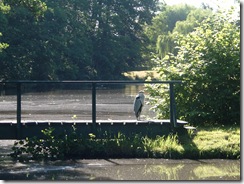 I was hoping to do a diesel fill at Wheaton Aston but they are not open on Sundays and as all the local moorings are 48hour we couldn't leave Jannock there till next weekend. We moved on in an increasing wind until we found a suitable 14 day mooring and stopped. Whilst we were eating our lunch a hirer scraped past, having had to move over to avoid an oncoming boat he then got caught by the wind and successfully clouted three out of three moored boats. The first boat owner gave him a right mouthful. We just shrugged shoulders and by the time he'd hit the third boat his wife was desperately trying to hide her head under the slide in embarrassment. Luckily the owner of that boat didn't mind either s shame on the prawn on boat 1.

It was good to see a charity bike ride go through - Helly to Selly(?) in aid of Help for Heroes. Not so good to see kids on motorbikes whizzing up and down the towpath in both directions. They were certainly underage, so uninsured, so heaven help anyone who became 'inconvenienced' by them.