More hop picking in the morning.

The locks were not open until 9am so while I slept on, Graham was off picking 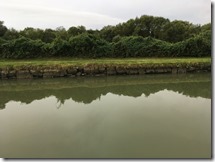 more hops – this time the ones we found late last night on the offside. The level of the pound was about half a metre down on normal level and the back pumps were running flat out as he walked down the towpath – I’m not sue how much closing the locks overnight helps.

The memorable part of our evening walk last night were the lovely smells coming from the Indian Restaurant in Hillmorton – must give that a try next visit. Just walk up the road from the bridge above the locks and it’s on your right at the top of the hill.

Four keen boaters passed Jannock before 9am and were patiently queued when Graham returned. We had a cooked breakfast 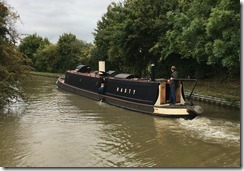 before setting off and found ourselves with no queue and following the fourth boat to go down.

We passed steam NB Hasty going the other way below Hillmorton locks. I bet the stoker has a cozy, if not a bit warm, seat.

Come midday, just after Newbold tunnel, we found lots of Blackberries on the offside so Graham moved Jannock across and we harvested about a litre of berries.

Into the marina in a howling gale, Graham managed to get into our berth in one without even giving our next door neighbour a glancing blow. Yah! 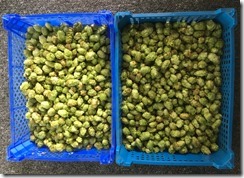 Posted by Jannock at 8:37 pm No comments:

Due to an excess of summer, and family commitments, J

annock has had a rest at her berth at Brinklow marina for most of July and all of August. During this time Graham has managed to do a lot of work that has been on the ‘to do’ list for about 10 years on her whilst she was located at a relatively secure location.

The rear doors were removed and taken home so that new wooden door liners could be manufactured and installed. Having completed them he then made a new liner for the front door as well. Before and after pictures are shown below. Doors and security are much improved now and the interior brightened up by the light colour.

He finished by repainting all the poles and the gang plank.

The planned Soddit cruise this weekend was cancelled as Ian has got shingles and so we decided to have an extra weekend pootle in the sunshine.

As there is no Cutweb rally this year we had a pico rally (a cuppa and cake) with the Nuggler crew before we set off. They are out for two weeks unlike our two days.

Heading south out of the marina, we passed through Newbold and Rugby. Unfortunately, there were no plums at all on the trees just passed Clifton Wharf – Shame! When we arrived at Hillmorton locks it was obvious that we were present on a hirer laden day and some had no idea what they were doing or common sense to help. One lock crew member seemed to think she’d be useful just holding a windlass. She got away with it at the bottom lock because the vol-lockie and Graham helped, but after that it wasn’t a very good stategy.

We spotted the hops either side of Hillmortons top pound and so we went on to the winding hole at Tarry’s bridge where we turned and returned to moor up for the night above the top lock.

We walked down past the top lock and harvested hops from the bushes on the towpath before returning to jannock for dinner. We then went for an evening walk, during which we found more hops on the non towpath side that appeared to have a better aroma before heading to the Stag and Pheasant for a pint.

Posted by Jannock at 8:23 pm No comments: