A weekend for rescuing!

After a delayed start the crew set off from Thame in two vehicles for the drive to Stockton. After leaving one car there we travelled via Coventry, and a fish and chip shop found using Google, to Ansty where Jannock had been left 12 days ago. Un-packing followed by 4 games of Soddit found us well into Saturday morning before retiring to bed. 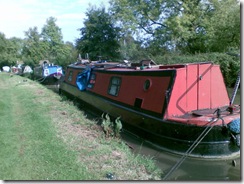 We left Ansty after breakfast and headed South, under the M6, to Stretton Stop where the boys were robbed of the task of opening the swingbridge by a kind boatyard member of staff who did it for us as we approached. Just beyond the road bridge we came across a "Mary Celeste"  boat floating across the canal with both front and back ropes hanging down into the water. The trusty crew sprung into action getting the boat back against the bank and re-pegging the mooring ropes. We did notice a third line, still firmly attached to it's stake in the ground, that had a T stud and four screws attached to the other end. This had obviously been the last remaining mooring point when the pressure became too much. Feeling very proud we continued down the North Oxford where a stop was made for lunch just before Newbold tunnel. After lunch (and No fish caught) we passed through the tunnel with 'Jerusalem' playing on Jannock's stereo much to the amusement of the crew of the boat moored immediately South of the tunnel entrance. They even complained about Brian turning the volume down as we left the tunnel because they were enjoying it so much. A brief stop was made at Rugby Tescos to allow Pete to fetch a newspaper as his pre-breakfast papershop hunt had been as fruitfull as the fishing has been.

Approaching Hillmorton we happened across a day-boat with novice crew firmly aground on the off-side of the canal. A few wise words of advice from Cap'n G soon had them off the mud and on their way again. Up through the three locks in a left-left-left formation found us on the Braunston summit heading for a peaceful overnight mooring near Wise's Bridge (80)

The lower ranks have adopted a large spider who is sat in Jannock's bath as a pet and named him Boris. After an evening meal of Steak and Kidney straight from the slow cooker, three more games of Soddit were played before it was deemed time for sleep.

A bad start to the morning as d 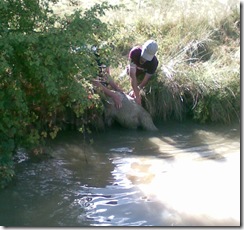 uring the fishing, the Cap'n evicted Boris from the bath into the cut. Ian then caught him on his fishing rod as he passed the front of the boat (the only thing he  caught all weekend I might add) but then flicked him back into the canal for some unknown reason. Down into a very busy Braunston we went meeting more than a dozen Northbound boats en-route. We wanted to use the rubbish point as well as a water fill but another boat had just pulled onto the waterpoint so we just dumped the rubbish in the skip and made for the junction to turn right towards Napton. Still more craft coming in the opposite direction specialising in meeting at bridgeholes and sharp bends. The sun finally appeared just as we decided to stop for lunch near Flecknoe.

After a good lunch and more fruitless fishing we set off and almost immediately found a sheep stuck in the canal unable to get out. The Cap'n put Jannock into the bank in front of the frightened sheep to corner it and Ian and Peter then hauled it out of the canal whilst Brian held the bow rope to stop the boat moving. Once out onto the bank the sheep ran as fast as it could away from the canal and the rest of the flock started following it in a sort of mini-stampede. At this point I must praise camera phones as I never would have got this shot if I'd had to find a camera first.

There were delays at Calcutt locks due to boats leaving the service wharf, below the first lock, and interfering with the smooth passage of boats up and down the flight. We finally moored Jannock, packed up and tidied and then drove back to Ansty to fetch Ian's car before heading home. A great weekend with good company, good weather, good food, good beer a few rescues and not many fish.

Posted by Jannock at 9:19 pm No comments:

A post-operative trip for Brenda

Having had Saturday to recover from Friday's face surgery to remove a Carcinoma, I had to take Brenda and Margaret (our neighbour) with me to move Jannock on Sunday as we are away in Manchester next weekend and she wouldn't let me do the move on my own. We arrived at HartsHill Yard just after 10 am and were soon on our way south. I spent most of the trip steering and Brenda stayed inside, out of the cold wind, chatting with Margaret. The Coventry canal is still nice and open around the quarries near Nuneaton since BW performed the major vedge-pledge work two years ago. We did seem to meet several other boats in obscured bridge holes even though there were two other boats travelling South in front of us. As I commented to a Northbound boater that there was no one following me he added "It's a pity they never said about you" indicating to the boat in front. Oh well, no damage done due to effective avoidance. At Sutton's we were 4th in the queue for the lock with another boat behind us. I hung around on the Coventry until there was room to turn into the basin outside the pub. Once through the lock and I managed to get my lunch, the crew had eaten theirs just before we arrived at the stop lock. We finally tied up on a 14 day mooring, had a flypast from a Mk 14 Spitfire and then the crew picked Blackberries whilst I went back to Hartshill on the Di Blasi for the car. All secured and on the way home by 4:30.

Posted by Jannock at 4:34 pm No comments: