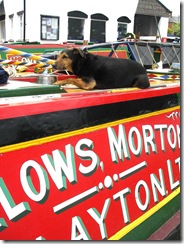 railway line last night. We heard one train pass just after we’d gone to bed and that was it until breakfast time. Talking of which, we were still full after last night’s Indian and so we postponed the ‘full English’ until lunchtime.  After a lazy start we set off towards Stowe Hill and Bugbrooke meeting many northbound boats, luckily none in awkward locations. Passing the new(ish) Heyford Fields marina near bridge 34 I noticed that their sign stated “One berth remaining” so it looks as though they are doing OK whilst others are complaining.

Just past Banbury road bridge we found Allan on nb Pengalanty and Toni on nb Snowdrop both moored up enjoying the lovely summer weather. Soon after that we decided to pull over ourselves and share a nice shady tree with the crew of nb Red Red Wine, another ‘ex-Black Prince’ craft. Once the promised full English lunch had been eaten, Brenda spent the afternoon sitting in the shade chatting to RRW’s crew whilst I returned to collect the car from Welton.  When I got back to Jannock we tidied and closed up and headed home. A short cruising day but very enjoyable.

Posted by Jannock at 8:39 pm No comments:

Only 6 months to Christmas

Plant of the day – Lime trees with their wonderful fragrance.

Wildlife of the day – Bats flying in and out of the aqueduct over the river at Weedon. 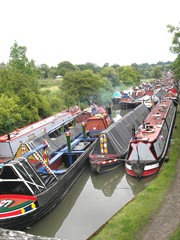 We started the day with a visit to the Historic Boat rally at Braunston.  The parade of boats seems to get longer and longer each year. The English language needs a new word to describe very, very slow mayhem. Having watched most of the parade attempting to chug past we finally decided to return to the car the long way round. At the bottom lock we warned an emerging time-share crew that they’d be held up and would need to manoeuvre in very close quarters. The response was a very angry “ you pay good money and then you get this! I don’t need holdups and hassle” No appreciation for free entertainment and a colourful spectacle then. They obviously hadn’t realised that the canal system is there to be enjoyed by anyone and much of it’s attraction is provided by it’s users.  Should’ve gone to Disney land.

We made our way to Jannock and set off South towards Buckby flight which we shared with a boat that possessed a willing crew of 4. One lad, an Aussie, was a willing worker – steering, locking, holding ropes and even lighting a BBQ on the rear hatch top etc. The remaining 3 crew were willing to let him. To be fair, the other lad on board had a broken ankle but his attempts at steering were impeded by dis-interest and alcohol. The two women were chatting to each other, or into mobiles, for most of the time with lots of drinkies and one attempt to turn a windlass each.

Boats across the cut were ‘de riguer’ today, many new hirers out. I had to rescue a ‘moored’ boat (Dances with Ducks) which was only attached to the bank by it’s cable that connected it to a substantial land based TV aerial. It would seem the mooring rope had been snapped by the effects of passing boats – it wasn’t in the best of condition to start off. Luckily there was a chain dangling from the rear deck that I could use to moor it back up to the piling with. 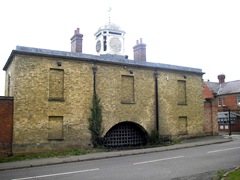 We moored for the night on the off-side, next to the church at Weedon. We’d like to turn into the Jannock tourist board at this point. We encourage you to visit Weedon from the church end rather than from bridge 24. Go down the steps from the 48 hour mooring and it’s a short walk to a pretty village with it’s history marked by it’s architecture. In the main village you will find a Post Office, supermarket, chemist, green grocers and a couple of pubs – no food served unfortunately as we were looking for a meal. There’s a quilters and patchwork workshop too. Walk on up the hill and there’s a gem, the old ordnance depot, established when Napoleon threatened our security. On the right is an accommodation block reminiscent of Victorian Aldershot. Most of the barracks are gone now. On the left is the main depot through smart grade 2 listed gates with the storage buildings ranked either side of the very visible military branch canal.

We decided to try the Heart of England hotel for a meal but they had a 45 minute wait for food so we went to the Brinjol Indian restaurant next door and had a very tasty meal. Then back to Jannock, via ‘Bat Watch’ alley to sleep it off.

Posted by Jannock at 8:20 pm No comments:

Simon (No. 1 son) joined us today for the short run through Braunston as we wanted to clear the area before next weeks Historic working boat rally.

We set off from Flecknoe following a Black Prince hireboat who had the misfortune of meeting all on-coming craft on bends or in bridgeholes. One of those was nb Shilling whose steerer announced that they were followers of our blog. Hello, nice to meet you briefly.

On we processed slowly towards Braunston building up quite a log-jam behind due to the amount of traffic going each way. I do hope they do not build any more marinas on this pound as it’s getting very busy at weekends now and being weekenders ourselves for most of the year we cannot avoid having to traverse it on a Saturday or Sunday.

We finally made it to Braunston where we passed Draco and Success, saying a brief hello to Krystina and then moved on towards Bottom Lock we met John  (nb Black Pig) for a chat as well. A single boat, Larry, was just entering the lock as we approached and so we shared with him all the way to the top of the flight. Once through bottom lock we found ourselves 6th in the queue for No. 2 and only experienced one other ‘straight in’ lock entry during the rest of the flight and that was the top lock.

Our passage through Braunston tunnel was missing one important ingredient. No, not oncoming boats because we met several of those, on this occasion the tunnel roof was dry. It’s not often you experience that lack of annoying drippy bits. I suspect it was because I had made the effort to rig up Jannock’s mega-torch aimed at the tunnel roof to assist me in avoiding them. Sod’s Law that is!

When we had finally moored up, Simon wanted to find a tree to hang his para-gliding harness onto so that he could adjust the straps to get them comfortable. No suitable trees were to be found and so he installed the gang plank into ‘diving configuration’ (see 2003 GiG day 1) and hung his harness from that. Job done.

Posted by Jannock at 3:13 pm No comments:

Flower of the day – the dog rose.

We arrived at Jannock and loaded up on the promise of sunny weather and 24 degrees. What we got instead was a cloudy sky and a very strong head wind. We left Claydon and headed towards the summit only pausing for while to allow a Southbound boat to get through Fenny ‘tunnel’ before we could pass through. We had no other problems all the way across the summit level meeting quite a few boats coming the other way but none of them at those

awkward places like Griffins bridge corner. Speaking of there, we notice the old droopy wooden footbridge just before Griffins has been replaced since we last passed this way. The new one  is inscribed “Wedding Bridge MMIX” so was obviously put up in 2009.

After passing down through Marston Doles locks we spotted a small bird perched upon a branch, singing it’s heart out, that we definitely could not identify. Luckily we found it in the Birds of Britain book that sits on the shelf in Technocupboard which identified it as a Reed Bunting.

We moored for the night above Adkins lock, immediately opposite nb Harnser and nb Goody Two Shoes (both Cutweb members) where I did an engine oil and filter change as well as spending a few minutes chatting to Peter (off of the latter boat) who was also doing engineeringy things. It the first time I have managed to change the diesel filter on Jannock and not get a hiccup from the engine when it is run afterwards. I must remember the technique I used for the next time.

Posted by Jannock at 5:54 pm No comments:

And down the other side

We only had to turn two locks in the Napton flight on our way down today, all the others had ascending craft as we approached. Once out of the bottom lock I re-filled with water whilst Brenda went and explored

the Folly shop. Out towards the junction Brenda had to take pictures of the miniature horses in the field as they were moulting and looked really tatty just like our cat Oscar does.

We get used to seeing craft not displaying a current licence, we get used to boats displaying out of date licences but this was a first for us – a licence that has had the date obliterated, deliberately scratched out so as to be un-readable. They’d only done it on one side so by looking at the one on the other side of the boat we observed it was out of date by two years. Boat reg. number was 4000149  get your act together.  Guess what – it’s another BW craft. Rules is rules.

Here is the weather postcast :- the forecast was rubbish! Did we get the promised rain overnight? No.  Did we get the sunny intervals?  No. The scattered showers?  No. (thank goodness).  What we got was grey with cold gusty winds that impeded steering in tight situations. One of which was meeting Tony Brooks at a bridgehole on a tight corner. The briefest of chats counted as our 2nd Cutwebbery of the weekend.

Home via Elderflower picking so that Brenda can knock up another batch of Elderflower cordial.

Posted by Jannock at 5:30 pm No comments: