There was a frost on the ground when we arrived at Marsworth for the run back to Bourne End and our home mooring. Today we had our neighbours, Mick and Gill, as crew. They have hired a boat for a week next April and wanted a refresher course as it has been 10 years since they last went on a canal holiday. You can't beat 9 miles and 20 locks, up and down, on the southern Grand Union as a refresher! As we were casting off we arranged with a passing boat to share the Marsworth flight with them but then had another boat pass before we were moving and so had to wait for the pair of them to ascend the bottom lock before we could start the flight. When Brenda arrived at the lock with Jannock she said that we had a partner who was busy winding in the entrance of the Aylesbury arm and would be with us in a short while. He was solo crewed and so Mick and I worked both boats up the Marsworth flight of seven locks. Once through the flight our partner was mooring at Bulbourne for a lunch appointment in the GJA so we continued alone.

After the summit, we then paired with another boat that had been watering up as we arrived at Cowroast lock. This couple had moved afloat in May 2010 in a new boat that the skipper has fitted out himself. His partner appeared glum and despite about 5 months of boating was still unsure about how locks worked. We shared all the way until 'the Boat' public house in Berko where they decided to tie up, without warning, after I had prepared Ravens Lane lock for two craft  :0(    We continued on alone which meant single gate working which is a lot quicker if you are not mob handed. At the 'Riser' we met Debbi and Simon who, having returned from their allotment, were on their way for an early afternoon pint.

Finally arrived back at Bourne End at 4 pm and then went and fetched the car from Marsworth in time for an evening meal before closing up and heading home.

Gill has written " Started our journey at Marsworth taking Jannock home for the winter. Weather cold but very sunny, a lovely day not that I did much work, I was kept busy making coffee and tea and watching everybody else work.  Mick helped Graham with the locks for a little while and handled the steering. Needs some more practice, I'm sure it will all come back to us. Graham's just got back from collecting the car and Brenda's getting dinner ready." in the log book.

I will do a calculation of this years lock/mile tally and publish on another posting.

Posted by Jannock at 9:46 am No comments:

Fruit of the day - Damsons 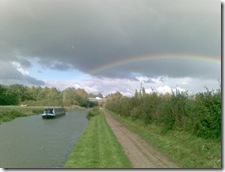 After a grey week our journey started in glorious autumn sunshine. We recalled the weather forecaster saying "you will be unlucky to catch a shower!" We didn't , we caught two downpours instead. This picture, taken on my phone,  shows us approaching Grove lock immediately after the second one.

As we cleared Soulbury we were warned by a southbound boater of canoeists and a canal clearance day ahead, forecasting slow going. We saw none of the former and the latter only delayed us whilst they extricated their work flat off of an underwater obstacle (the 2nd motorcycle frame they had removed that morning) that had entrapped it. Gold stars to the Milton Keynes branch of the IWA and Wyverne shipping who sponsored the event.

The first and second teams we met are pictured below:- 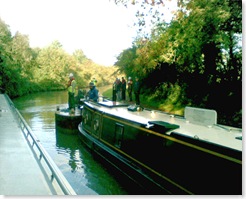 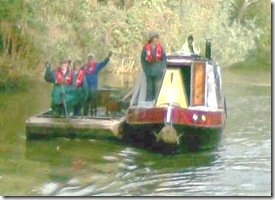 We caught the third team up at Linslade lock where we shared with one of their craft. They were en-route to the Tesco mooring to retrieve trolleys using a grappling hook.

At Slapton Lock cottage there was a bowl of Damsons with a notice asking for donations to charity for them. I took a bagfull and placed all my change in the box. We picked up a lock sharer at Horton lock, a northbound boat that had winded at Slapton windy hole, who we shared with until they reached their home mooring at Vicarage farm. We knew there was a hire boat following them so we waited at Seabrook bottom lock for them to catch up and I usefully spent the time collecting many more Damsons from the multiple trees located on the offside of the lock. The Wyvern boat, Daffodil, then shared with us until we cleared lock 38 when we moored up and they continued. As I cycled through Pitstone bridge I saw the widebeam trip boat approaching so I stopped and warned Brenda of it's prescence. I still remember the incident she had with this one a few years ago due to the overhanging willow branches but this time the trees have been nicely trimmed back and my timely warning allowed her to hold back to let it reach it's mooring at the yard.

A late-ish start due to Brenda still recovering from various lurgs and inoculations during the past week found us setting off from Banbury Road bridge at 11 am with a grey overcast sky and occasional drizzle. Not at all what was forecast by our Met office friends. Into Blisworth tunnel at 12:15 and we met three northbound boats within. The middle one of the three had a 'searchlight' like headlight aimed straight ahead along the tunnel. As we approached each other I found that I could not see a thing ahead and the beam was painful to look at so I stopped and waited for him to pass whilst I kept my eyes averted from ahead.Once the lamp had passed me by I made comment to the steerer that he ought to aim his searchlight up towards the roof and not straight ahead. We passed down through Stoke Bruerne solo as there was no one behind us in the tunnel and no boats about to set off from the moorings to go down. Below the flight there is a BW notice that reads " Slow down passed moored boats" - shame they didn't check the spelling before manufacturing the sign. We pulled over near Grafton Regis to harvest some of the abundant Elderberries there - we fancy making some Elderberry whisky this year ;^)  On to Cosgrove through greyer and colder weather finally mooring up below the lock just three boats away from nb Wyrd with Trevor aboard. A mini-GiG was in order and a very pleasant evening was spent before we finally gave in at just after midnight.

I got up and set off in the cold grey gloom just before 9am whilst Brenda languished abed under a warm cosy duvet. Just after midday the sun came out, as we made our way down through Milton Keynes, and the blue skies warmed us body & soul. This was supposed to be what was forecast for yesterday so we've missed out. After Bletchley we were trying to decide on our final mooring place when we were joined in Stoke Hammond lock by a boat crewed by thirty-something liveaboards with a penchant for pirate-noir decor. Whilst locking up, Brenda asked the steerer if they were going up Soulbury locks. His reply was " we don't go that far, we usually moor in Milton Keynes but feel we need a few days out of the city".  I walked ahead and measured a suitable gap between the last moored boat and the first fishing peg so Brenda eased Jannock in with very little disturbance to his swim. As the other boat passed us and the fishing match she called back to the steerer from the bows with " Oh no, an effin fishing match - this would have been effin perfect for us" They moved on a few yards and she called again "we'll just moor up here, these blokes look friendly, they effin won't mind". Luckily he didn't feel the need to ruin 2 or 3 blokes days fishing with less than an hour to go until the end of the match. They carried on up the cut with just her swearing being carried on the balmy breeze. Are live-aboards necessarily boaters?  Discuss.

Note to Brian and Ian :- the bloke fishing next to Jannock caught 4 lb 1oz of fish and he was no-where near the top of the leader board. There are fish in the G.U.

Posted by Jannock at 1:24 pm No comments: