I took Friday afternoon off work in order to sort out the MOTs that were due. Take the car for new tyres and an MOT and then continue on the Di Blasi to get that MOT’d as well. Di Blasi flew through with no worries. Returned to find the car with 4 new tyres (as requested) and an MOT failure certificate – leaking rear shock absorber. A quick phone call to the VW dealer revealed that the warranty runs out on Saturday midnight and so I need to take it in so that they can start a warranty claim before it ends.

So, the plan to go to Jannock on Friday evening was replaced with a Saturday afternoon start instead and for the second time in as many weeks a meal that we had planned to be taken on our travels was eaten in our home town – how exciting!.

We arrived at the boat at 2:30pm on Saturday – slightly later than planned but happy in the knowledge that the faulty shock absorber will be replaced by VW before a retest.

Weather of the day – Wind! 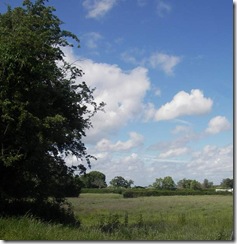 At our first lock, Swanley No. 1, the offside gate paddle kept jamming because one tooth is broken on the pinion that moves the rack up. On to Baddily where we were the third of three boats ascending with an equal number coming down as well. At Baddiley No. 1 I had to teach a group 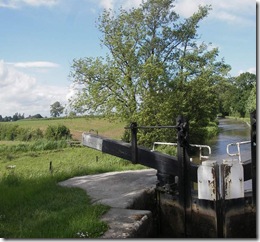 of Aussies how to work the lock as it was their first since collecting their 69 foot boat from Wrenbury. Having instructed their steerer on the importance of keeping their boat clear of the cill I then found him peering over my shoulder as I instructed the rest of his crew how to operate the gate paddles. He was sent back to his post with his tail between his legs and told to keep an eye on the rudder. We only managed to delay two cars whilst we passed under Wrenbury lift bridge and continued on until we found a nice quiet mooring alongside Canal Covert.

After a very quiet night in  a very peaceful mooring with a noticeable lack of towpath joggers and dog walkers we realised that whatever plan we had thought we would keep to had in fact drowned. We were very lucky to only have the wind to contend with yesterday, today it was raining as well. Showers were forecast but we think they’d formed a union -  power in numbers – and are picketing the area.

Plan C was being hatched. At least the temperature was as forecast – it just managed 16 degrees inside the cabin. Yet hire-boaters passed us by, often identifiable by the fact that they have all the doors open even if it is chucking it down, blowing a gale and the mercury is so far south it’s in the Azores!

Graham managed a car shuffle on the Di Blasi during a lull in the rain and only got slightly damp and so we eat lunch, packed up and set off to execute Plan C – a visit to the Secret Nuclear bunker at Hack Green. Tony and Jenny Brooks on nb JennyB (fellow members of Cutweb) passed us just as we were locking up and abandoning ship so we had a brief chat. 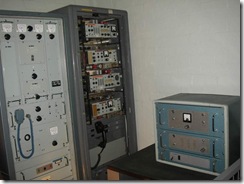 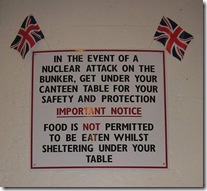 them during the late 70s and early 80s. We were quite tempted at the gift shop offer of a Geiger counter for £55 but although they were claimed to have  been in working order once no guarantee is given now – so we didn’t buy one.

Posted by Jannock at 9:15 pm No comments:

After breakfast Simon took me in his car to Church Lawton to move my car to Barbridge – no Di Blasi this week as we knew he was joining us. On our return John and Gillian were out in their garden on the opposite side of the canal so we bade our farewells and set off along the Middlewich branch.

I was amused to see a sign hung in the window of a bank-side moored boat “Master Boaters slow to 2MPH to pass moored boats – Masturbators don’t” unfortunately I didn’t get a photo. 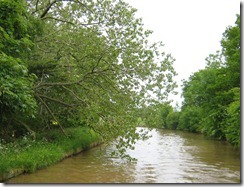 At one point we had to move round a tree that is falling into the canal. It appears that branches that were interfering with the towpath have been trimmed back but the rest is a hazard to shipping.

We stopped at bridge 14 to visit Church Minshull as Simon had promised to buy us lunch. We vaguely remembered using a path to access the village in the past but had to make do with the road this time as we couldn’t identify where it started from. The Badger has recently re-opened and does very good quality meals and had 3 real ales on hand pump. The food was not ‘pub grub’ and was priced higher reflecting the quality of the ingredients and preparation. All three meals were excellent so another establishment receives a Jannock recommendation. 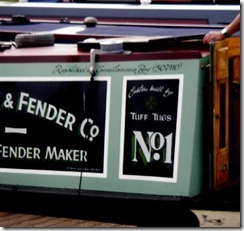 Once we had rejoined the boat we set off towards Aquaduct Marina where I purchased 123 litres of diesel to top up the tank. Alongside the services wharf was a tug style boat for sale which had the wonderful sign writing stating “Registered in Guantanamo Bay” before it’s registration number on the cabin side. Brenda treated us all to ice-creams before we left the marina to continue our journey.

Through the last two locks and we emerged out of Barbridge junction to pull onto the waterpoint and refill the tank before moving down to moor opposite the Olde Barbridge Inn. I then took Simon to his car in Middlewich, bade him farewell and returned to Barbridge as we have a three day weekend this time.

Posted by Jannock at 6:57 am No comments: 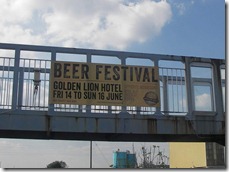 We travelled up to Jannock on Friday evening collecting Simon from Middlewich en-route. Jannock’s interior was at 29.5 degrees when we arrived so we kept all the doors open for the first hour to let it cool down a bit.

We set off down the remaining Cheshire locks in glorious sunshine and made good time with a lot of locks in our favour, a situation made easier by the dual locks on this stretch and an extra pair of hands. At one point we met a Black Prince hireboat coming the other way and the lady on the boat exclaimed “Oh, it’s Mr Googly eyes” it seems we met them during our last trip on Jannock just as they were starting their fortnight cruise around the Cheshire ring.

At another lock a young lad appeared and started asking Simon lots of questions about what we were doing and why. He ended up getting a complex physics lesson from Simon which went down quite well as he was keen to learn.

At Hassall Green we noted that the Romping Donkey is still closed but this has nothing to do with the stories about their tattoo evening for minorities but more to do with the new owners altering the premises without the required planning permissions. The nearby Lock 57 establishment was also closed.

The Shropshire Union Canal Society were holding a ‘Saturn event’ at Wheelock. We stopped there briefly while Brenda visited the local store to find out that they did not stock any of the items that we were trying to obtain and had not even heard of decaffeinated beverages. We moved on and finally made it to Middlewich where we had a difficult turn into the Arm due to the wind blowing from the south combined with a boat already waiting to enter Wardle lock. We followed them through the lock and were startled as we passed through bridge 31 when a cyclist passing through the other way informed us that “they are waiting for you ”. It turned out that our friends were waiting in their garden for us to pass. We moored opposite their house and then went and had a good evening with them once we had eaten the Thai curry Brenda had been cooking in the slow cooker all afternoon.

And specially for Swiss blog readers, here is a full length picture of Jannock.