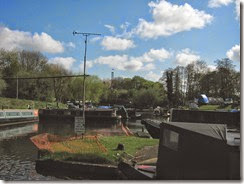 Another sunny day, and warm enough for himself to sport shorts and sandals; no socks despite being British! As we passed Bridgewater basin a freshly blacked narrowboat was being craned back into the marina. That’ll be Gecko in a couple of weeks then;^). 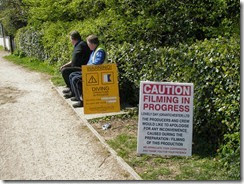 We stopped at Ricky and restocked with milk and essential vittels at Tesco before moving on towards Stockers Lock. A very excited lady walker told us that ‘they’ were filming there, and so ‘they’ were. To think that we’ve come away from Midsomer and Morse/Lewis territory to get away from all that.

So, we had a delay whilst chaps in olden days (1950s?) clothes (the Policemen’s high collar uniforms being the best candidates for promotion of heat stroke) with olden day cars and a good deal of 20th century hi- 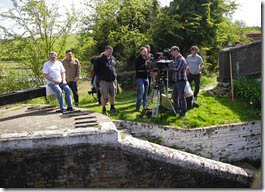 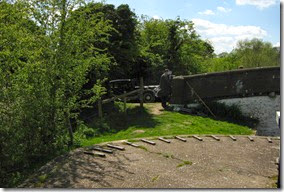 techery to film with got on with their jobs filming around the lock and associated bridge. We were told that Robson Green stars, but apart from that we can offer no movie or TV gossip dear 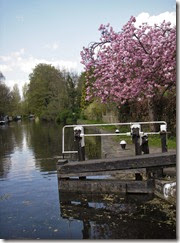 And talking of our dear readers, hello to nb Valerie. Nice to make your (passing) acquaintance. We moored for the night mid-gravel pits, a nice peaceful spot if you don’t include tweeting, quacking and honking.

Gourmet note :- Tesco pork and apple scotch eggs are rather good! Especially when short dated and reduced to 10p each.

I don't know what calendar you're on, but your dates have been one ahead of reality since the start of this trip!