Issue of the day – Yoof groups with leaders/crew who seemed to have little idea of what to do canal-wise whilst in charge of and even instructing children. Hhmmmmmmmm. 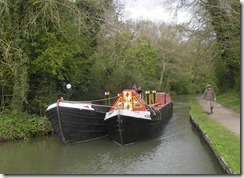 For no other reason than we need to calibrate the new oven, we had chocolate croissants for breakfast. On that same note I will need to bake us a cake.

Through Blisworth tunnel to the resounding melodies and harmonies of Bellowhead played loud on the stereo. If Brian were here it would have been Jerusalem and the Dambusters. As we emerged at the northern end we met nb Minnehaha southbound. Sadness and so many happy memories of Bill.

It was all going well so Brenda 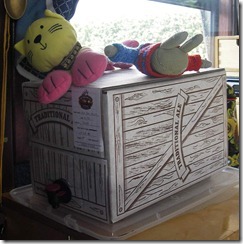 decided to take a shower. The bag which was still fragrant with last nights fish and chips was secured (enough for the wind conditions of the moment) to the cratch as she needed the bath-space. At the point she was wettest and soapiest the wind turned to gale force. The coolbag decided to take a swim and I noticed it floating past, hard reverse and ended up pinned against the piling by the wind. I stepped off and fetched the bag back but then was unable to un-stick Jannock from the magnetic piling. Brenda assumed all the engine noise etc. was me taking avoiding action from southbound boats at bridge-holes. Wrong! The light dawned and she dressed and came topside to get the worlds worst blow dry ever! I ended up taking the boat pole and pushing Jannock off whilst Brenda drove. I then ended up having a long walk along the towpath carrying the pole until we found a sheltered spot so that I could get back aboard. Remedial action was required to restore Brenda’s hair sanity , oh, and a cup of tea.

When the first rainstorm appeared we decided to moor up just past Bugbrooke for lunch. Whilst we were eating nb Limelight passed us by. Once we had finished lunch we set off again just in time for the second downpour during which we passed nb Limelight moored up for their lunch. On through Weedon with a constant flow of southbound traffic to be met at every bridgehole.

The boat with a bush in it that Brenda included in her Crepe Craft 2013 calendar has been got at by someone - it is now a floating arbour as opposed to a floating harbour.

We were on our own when we arrived at Buckby bottom lock so we sat in the empty lock awaiting someone to share with because we could see three boats approaching in the distance. The first stopped at Whilton marina diesel point, the second turned into the marina and the third moored up on the 14 day moorings so we set off up the flight solo as there were a pair of boats waiting to descend through the lock. We heard lots of tales about a long queue for lock 10 as there had been a stoppage there earlier in the day due to someone lifting a gate out of it’s socket. When we arrived there only one boat was left and so we shared the rest of the flight with them. Past Norton Junction we found Nackered Navvie moored up with no one apparently on board. We moved on through the next bridge before mooring for the night in the peaceful countryside.