A day of Threes

The sunshine that Matt and Ali brought with them last evening has endured – hooray! We pulled off 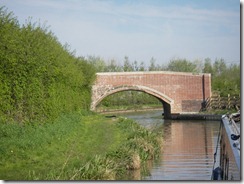 of our peaceful overnight mooring and found ourselves following nb Trafalgar (Portsmouth) out of Calcutt, which we believe is a navy boat. They were all over the canal as every time something caught the steerers attention then the boat started heading towards the opposite bank. The repaired bridges (80 & 79) near Barby Hill are both looking good now. At Hillmorton they decided to wait for the nearside lock to be used so that they could refill it for their use while offering us the offside lock that was ready. Result! We flew down the flight with no delays at all. Meanwhile Trafalgar insisted on only using nearside locks and so a hireboat crewed youths managed to overtake them as well. Brenda referred to them as HMS Navylark. Trafalgar – Troutbridge. Not a lot of difference.

On through Rugby, past All Oaks Wood and on to Stretton Stop where I managed to hop off the boat, fetch some milk from the shop and get the swingbridge open before she had managed to steer Jannock through the melee’ of hireboats on a changeover day. 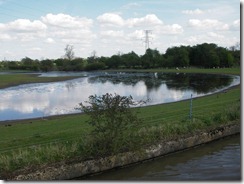 As we approached Tusses bridge we noticed that new duck ponds have appeared in the fields either side of the canal. I hope these are due to a high water table and not the canal leaking. At Stretton Stop two cruisers were waiting to ascend just where I wanted to swing the stern in order to get round the turn. The second one pulled out to enter the lock but then quickly changed his mind when he spotted Jannock’s back end rapidly approaching him sideways.

We moored for the night and within 25 minutes I had applied another coat of varnish to the back seat and mended my glasses by making a tiny screwdriver from a bradawl whilst Brenda had showered and got a roast lamb dinner to the table. Isn’t a slow cooker a wonderful item of boats inventory.

As for the threes :-