Oh what a day!

Hurrah – Brenda wasn’t cold at all last night. We haven’t put the central heating on at all this trip so most nights 4:30am felt a bit chill, but not last night! 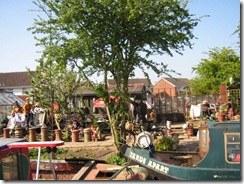 A very pleasant mornings cruise in warm sunshine was peacefully un-eventful. However we did take a broadside from another boat. They came past us far too fast whilst we were still moored up at Hawksbury but surprisingly they were going far too slow for anyone's tastes or needs by the time we caught up with them near Nuneaton. When the going was suitable I pulled closer and asked to overtake. They agreed but wanted us to take the ‘wrong side’, i.e. pass to starboard, which would have been fine had they moved over a bit more to allow sufficient room for the manoeuvre. Consequently they gave us a heft clout with their front end as our backend passed them. Paint was lost – boating truly is a contact sport. Later in the day they again passed us moored at our destination at warp factor 2 but then cut the engine to achieve ‘no steering capability’ as they approached a water point and adjacent bridgehole. Much revving and manoeuvring finally got them watered up before they set off at speed again.

Whilst I was pumping out our black-water tank at Braunston last Sunday we got talking to another Cutweb member to whom I had sold a previous Di Blasi. He said he’d had little trouble apart from having a drive belt break once. I commented that I had never experienced that problem – well I hadn’t then! Twenty miles into

the journey to fetch the car from Hillmorton the drive belt on my Di Blasi decided it was fed up with being a continual loop and wanted to be free. This was on a dual carriageway section of the A5. I pushed it about 1/2 mile to find a safe haven from where I could recover it later whilst being harassed by very fast lorries, vans and cars. I then folded it down and padlocked the bike and my crash helmet to a suitably secure road sign, and hoping that it would not be stolen I then walked a further 5 miles down the A5 to the car in the blazing sun. No shade or offers of lifts on the A5 – shame. In hindsight maybe I should have kept my crash helmet with me as several solo motorcycle passed whilst I was walking. I finally arrived back at Hillmorton about a hour late and feeling very hot and sweaty – thank goodness for vehicular air-conditioning. Back to the traffic sign to collect the Di Blasi and then back to Jannock where Brenda had a cup of hot tea and my dinner waiting for me.

We then off loaded our stuff into the car, washed up and headed home. I was supposed to be working night shift that evening but luckily a telephone call was received at 18:05 telling me that the job had been cancelled due to technical issues and so I was able to had a good night’s sleep to recover from the enforced route march.