I was up and en-route to Alvecote on the Di Blasi at 6am this morning. I 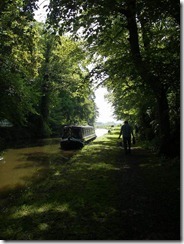 then moved the car to Stone and returned back to Jannock just in time for a cooked breakfast. There was nothing at all

in the crayfish net when I recovered it from the river Trent, I wonder if it was due to the number of geese here?

We set off towards Colwich lock, at about 10am, where we were fourth in the queue to ascend. Haywood lock was relatively easy with just one boat entering in front of us as we arrived. After that came Hoo Mill lock where we were seventh in line. After about 3/4 of an hour waiting, the boat in front of us gave up and turned to return to Great Heywood. 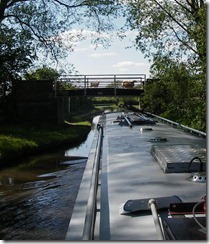 They were supposed to be on a training trip on their new boat and decided that they already knew how to queue. By the time we’d made it to the front of the queue we counted nine boats waiting behind us. Every lock after that had one boat waiting to enter as we arrived.

Once we had passed through Weston lock I went inside and had a shower leaving Brenda at the helm. When I had finished we changed positions and she went into the bathroom. It was then that I happened across a loose boat blocking the canal. No sign of life aboard and the mooring ropes had piling hooks still attached. I nosed Jannock around the obstacle and then decided to take it in tow and affix it to the piling about 300m away. All this manoeuvring attracted Brenda’s attention and she appeared on the back deck to help wearing a bathrobe, a towel around her hair and a pair of stout trainers. Not the best of boating fashion. 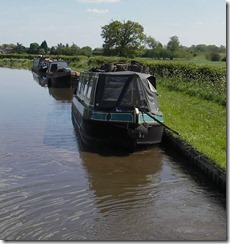 Once the rogue boat was firmly re-attached to the bank we continued on towards Aston lock where we met a southbound Anderson hireboat whose crew were determined to complete the Four Counties ring in 1 week. I hope they do not encounter lock queues like we’ve had today (or need any shopping etc.) otherwise they’ll be running long days on the Shroppie.

We moored for the night on the 48 hour moorings below Star lock in Stone. After dinner it was nice to have a visit from our friend Ian (aka Norman)