Braunston on a bank holiday

I was up and out at 7am to fetch the car from Cosgrove. The wonderful sunny morning at Welton was soon replaced by fog south of Towcester. Once back on Jannock I enjoyed a nice bowl of porridge for breakfast before we set off towards Braunston tunnel. This was really dry inside compared with the the Blisworth boat-wash yesterday. Once out the otherside we had our best ever run down the Braunston fight after a quick chat with the Minimo crew who were moored above the top lock. Down through a very busy Braunston until we found a mooring free outside the Boathouse where we were meeting Ken Kroeker for Sunday lunch. After an excellent meal we moved Jannock 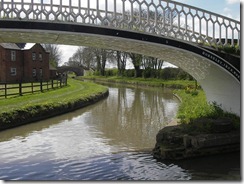 down to the turn to wind around before returning right-sided to the sani-station to perform a pumpout. As we arrived a hire boat was just vacating the sani-station mooring. A lady who was emptying a cassette there told us that the hire boat crew had been eating their lunch there using the walls and hatch as somewhere to rest their picnic upon. They must have been either illiterate or very stupid indeed. I pumped out Jannock’s tank and filled up with water while Brenda walked the rubbish down to the skips at the Stop House. We then winded again in the marina entrance, waved farewell to the newly painted and re-named Prairie Crocus and continued on our journey North. Matt and Ali rang and wanted to come and see us so we arranged to meet them at Willoughby wharf.

A stag crew, wearing the obligatory silly hats, stripy pirate tops and/or women’s clothing were in front of us as we left Braunston. They were fairly well mashed. Not knowing the canalscape they kept running aground on the shallow insides of the bends. We were tutting like mad! They seemed to be leaving a trail of bottles and cans floating in the canal. Then we saw them pulled up onto the towpath yelling at us as we approached. Tut tut 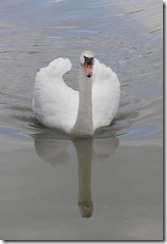 tut. Could we rescue something from the water for them? Tut. It was a food package blown off of their roof by the wind as they prepared ham rolls for tea. They apologised, albeit rather drunkenly, explaining that they didn’t want to litter the place. Sorry guys, we misjudged you. The bottles and cans were someone else’s and your manners were impeccable.

I managed to re-varnish the back seat and fit a cooker lid retaining bolt before they arrived and we spent a very pleasant evening bathed in sunshine and birdsong.