It was sunny when we woke up and stayed dry all day – surprising some pounds still appeared to be low after all the rain we had yesterday and during the night.

We passed this boat moored near Hemel Hempstead – a tree had fallen into the canal just missing the stern. A stiffish breeze was Brenda’s excuse for some excessive bobbing about whilst waiting for locks to be set. Once again we seemed to be following the same inconsiderate boater as yesterday until Kings Langley when the bottom gates were closed on our arrival.

whys and wherefores of actual boating, just how to move their home from A to B. One lady admitted that she’d never hammered a mooring stake in before, but was going to give it a go as the only space available near Grove bridge had no piling. I was impressed by the SSSI that had established itself in this boats rear fender.

Earlier, we had heard of a lock closure, with restricted use for narrowboats only, at North Grove lock (71). CaRT were moving 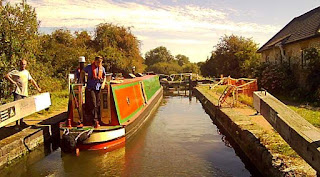 boats through on ropes to reduce the chance of the damaged top gate failing further. It had collapsed due to rotten timber and being hit hard by a boat. It was open from mid AM until mid PM with a lunch break in the middle. We were 4th in the queue when we arrived and it took one and a quarter hours before we were roped through – engines off and no crew allowed on-board during this operation. We were told it would likely be mid-September before the gate could be repaired.

A busy day with thirteen slow locks and a delay near the M25 ;^)

A timelapse video of this journey can be viewed at  https://youtu.be/FjAlM30n9O4