Trying to find a mooring in Oxford

Having said farewell to our friends aboard nb MaryH, who we moored alongside overnight due to congestion, we set off just after 10 am and joined the queue for Abingdon lock.

Before we left, nb Frodsham came down the river and moored in front of us. I believe this replica MSC
tug to be diesel powered as there was no accompanying cloud of smoke as it arrived. 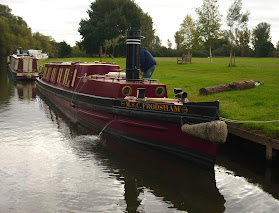 We had an un-eventful trip up to Oxford in nice, but chilly, overcast skies with occasional sunshine. We planned to moor near Folly Bridge in Oxford as we need to go home to babysit our grand-daughters on Tuesday so that Mum and Dad can go to a funeral. On our arrival all the moorings long enough to easily accomodate Jannock were occupied so we did an ‘up and back’ avoiding the rowers, punters, paddle boarders, pedalos and canoeists. Too many of them seem to bob about with no idea that there are ‘big’ boats about and no idea how to steer.

Most worrying was a paddleboard family outing. The dog had a life jacket on, two kids under 10 did not! They may be competent swimmers but a quick intake of breath due to surprise, shouting for help or cold shock could easily compromise that. What’s that you say Lassie “the kids are drowning and you’ve got the only life preserver on?”

No signs to the contrary so we tacked Jannock onto the very end of the line of moored boats. This was against the entry point of a smaller stream so had a shoal adjacent but we managed to fit in, albeit aground, and use the ‘Beale Park Woodpecker’ holes in the gangplank to secure it to the bank.

We then cleaned up, packed all our washing into two smallish bags and set off to get the 280 bus home.

Our mooring for the next couple of days was ///below.dare.smashes