The best blackberries were at the dis-used Sani Station

Mooring in Pershore : good moorings park-side at the town. There is a swimming pool for kids to let off steam, a good supermarket, Weds to Sat 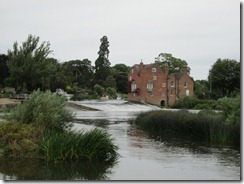 there is an indoor market, the town beyond has all you’ll need including a launderette. Of special interest to Graham was the Brandy Cask public house with it’s own brewery. In the interests of research a visit had to be made, a good local pub. 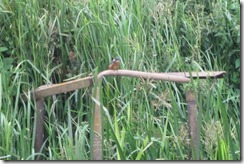 After the rain of the last couple of days it seems the local child-life is going hungry. Kingfishers were on the flit and I found myself looking at a beautiful fox. She had what may have been a plump pigeon in her mouth. She was not going to lose my gaze. She trotted about here and there, it was obvious that she had no intention of giving us any clues as to where the entry to her den, or her cubs no doubt were.

Minutes later a large raptor flew low across the river, just above Graham’s head. He only saw the shadow on the water. In it’s talons it had a rat or small rabbit. It flew into the trees and no doubt the open beaks of its brood.

And not to be forgotten, Bredon hill hove into view again, and again, and again. I think it’s following us. We pulled in to use the Sani station marked on the approach to Evesham in Ye Olde Nicks. It would be useful if the “Permanently Closed” sign was where it could be seen from the river and where it is not going to be obscured by herbage growing around it. Never mind, the blackberries we gathered made the stop worthwhile. More jam was made. 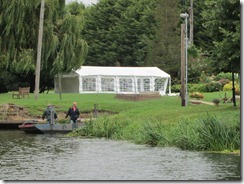 We moored for the night in Evesham, finding the moorings furthest from the town and nearer Abbey bridge the quietest location. Off to meet the Officers and crew nb Lord Toulouse for a slap up meal at the unlikely named Indian restaurant Rilay’s. I’ve heard of Anglo-Indian cuisine but never Irish-Indian. Sag Aloo anyone? Or is that a racist comment?