Sharing Hatton with a Sea Otter

First Kingfisher of the day spotted at 08:30.

We waited until a ‘likely crew’ came past – well, there were two of them and both in their seventies, but they looked efficient – and we set off down Hatton sharing with them. We got into a good rhythm using two open gates 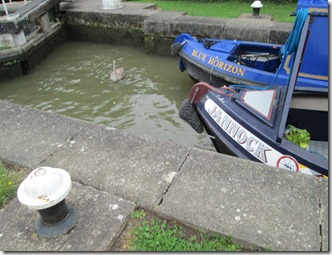 to enter the lock and only one to exit. The sea otter was very manoeuvrable using it’s bow thruster. In one lock we shared with a young swan who was so determined to get to the next pound that it rushed in as I opened the top gates. We managed to complete Hatton in less than three hours so thanks to nb Blue Horizon for your company. They pulled over once they were out of the bottom lock so we continued on alone.

As we crossed the aquaduct over the 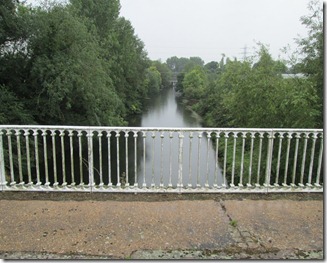 River Avon, I wondered whether we would ever be able to come all the way to Warwick up that river. I expect it would be a lot easier than having to use the Stratford followed by Hatton as we had just done.

We had promised ourselves Sunday lunch at the Cape of Good Hope but we cruised past and down the two locks well before lunchtime so continued on in the increasingly worsening rain. Lunch was taken by bridge 43 – in ‘The Moorings’. Not the cheapest Sunday roast we’ve ever had at £15.00p per head but good Purity beers, bread and olives to eat while you wait and a good roast with lots of nicely cooked vegetables made us feel better as we watched Jannock getting soaked outside. The other pub opposite is not quite so accessible as there are no mooring rings like outside ‘The Moorings’

We hit Lidl for a spot of cupboard replenishment before setting off again once the rain had cleared up. We stopped on the fourteen day moorings just before Radford Semele lock as we don’t have to get to the Blue Lias until the second weekend in September.