A scrumpin’ we will go

We did it again – got to our chosen mooring spot, tied up after a day of glorious, scorchio sunshine and then the thunderstorm started and the rain plopped into the water. 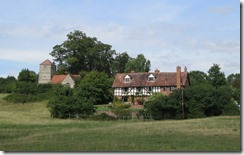 We left Oddingley, having loaded all our stuff onto Jannock, with Brenda admiring the house that was for sale alongside the canal.

As we approached Tolladine lock we’d observed that this year’s sloes are plumpest we’ve ever seen. Graham had to try one as he thought that they may have been a very dark plum. He 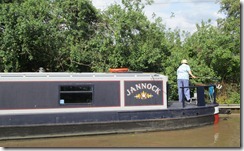 reported back that they were nasty, sloes indeed. But, I’d spotted some juicy plums on the offside and set off to scrump them. Later we had to own up and offer them back to their owner. G met the farmer pulling out weeds from his hedgerow i.e. the bank alongside Blackpole lock. He asked if the farmer owned the field alongside Tolladine lock and he said yes. 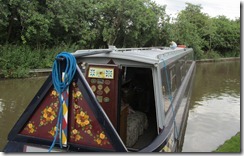 We owned up to stealing his plums but he was happy since he in unable to harvest the ones overhanging the water. It turned out that he plants fruit trees into his hedges when Aldi have a few un-labelled plants left at the end of an event. He offers them a quid for each unlabelled plant and then plants them in the hedges around his field – lucky dip fruit growing. Brilliant! Plum jam tomorrow.

Now here’s a thought – bridge graffiti – instead of councils painting a block colour over offensive messages and pictures, they could try using a couple of colours and leaving a random pattern, disruptive camouflage as it were. Block colour leaves a blank canvas, but an eejit’s invitation to partake of un-pleasant activities would be harder to see if super-imposed over a “pattern”. Just saying . . . .