Hooray–we’re on the boat again!

Jannock having been used for a week during July by son Simon and a Swiss crew, Brenda and I returned to reload all of our junk stuff today ready for a one week Boating holiday. The original plan was to ascend the Wolverhampton flight to visit the Black County museum but we are already on plan C. More will be revealed as the trip progresses.

Having loaded all our belongings, parked the car and eaten a much needed lunch, we set off from Cross Green at 2pm and made our way down the 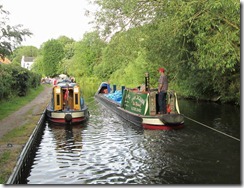 Staffs and Worcester towards Oxley. We had to wait a while before following another boat through the narrows – he had sent his wife ahead to stop northbound traffic but then made a very slow passage through after a northbound boat had exited.

Down one lock into Compton where we decided to 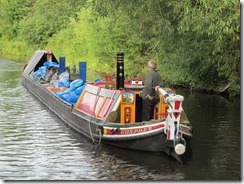 moor for the night as the 48 hour moorings were empty. We were passed by nb Roach pulling butty Gosport and these were the only photos we took all afternoon.

A quick walk up into Compton in order to get a mobile phone signal revealed a very useful collection of shops at the crossroads. A couple of supermarkets, Spar has a butcher and a post office, eateries include a pub, a chippy and an Italian, there are a couple of pubs and an off-licence (with some splendid deals) and a launderette with a Chinese massage parlour above. Best of all – the off-licence did bottled Bathams. Not quite as good as draught but the first I’ve ever come across.