Plan A was to cast off after G had completed a telephone conference call scheduled for 09:30 (dratted work getting in the way of his day off).

Plan B was to cast off earlier, pass down through Town lock and moor in Victoria Park so that he could have his call and I could go shopping for necessities ; viz pies (from Griffins) and beer making supplies. I checked for Griffins opening hours last night only to find that they were not displayed, and I had a feint memory that they shut on Mondays. They do! Beer making supplies, at Wilko’s, all except the one thing G wanted.

So, plan C – find a good sale and buy some Xmas presents. That went well ;^)

Back to Jannock to find that the Plan A conference call had been postponed for 1 hour. and plan B was that G should be available at 10:30. He could not promise that as the locks come thick and fast out of Newbury and so both plans were dropped. The one delegate became stuck on a train that was not going anywhere and so he rang G and had a little conferette.

We loosed off and followed on behind yesterday’s sharers. Their plan A had been to loose off quickly and follow us down through Town lock hoping to catch us up and share again. They did not know about the Victoria park stop and so passed Jannock while G was on the phone.

So started a day of boating for me and cycling for G. All was well until Ham lock. G indicated that Jannock should enter on the left gate. I slowed down past the boats moored outside the marina, took the corner towards the lock to find myself being pushed broadside into the weir stream by a very strong current that was not visible on the surface. Still waters and all that. I failed to have enough momentum to overcome the sideways drag and ended up with the bows against the top gate and the stern well into the weir stream. Plan A has always been ‘never to try and enter a lock sideways’. Plan B was G on a rope but there was nowhere to go forward. The weir way backwards and turning impossible. Much jiggery pokery, the second top gate opened and plan C saw us safely in the lock. G had spotted that the safety ratchet on one of the top paddle mechanisms was broken so he phoned CaRT emergency number to report it. As Jannock left the lock and the weir stream joined the channel the amount of water passing through the weir was obvious.

At the next swing bridge there were a couple of fellas walking back to their vehicles and one had a CaRT lifejacket on. G decided to mention the Ham lock problem with the safety ratchet. He enquired whether either of them worked for CaRT. CaRT asked one of them, who’s that? G pointed out the logo on his lifejacket and said Canal and River Trust, you know CaRT. He finally admitted being employed by that organisation as an engineer and agreed to take a look at the Ham lock problem. All that money spent on rebranding etc. and obviously the employees do not know their own organisation as CaRT. 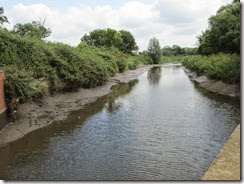 We eventually caught up with our ‘yesterday sharers’ at Monkey Marsh lock. Our original Plan A had been to travel to Aldermaston as that is where G had moved the car to but we decided that there were not enough hours left to get there and still make G’s blood donor appointment this evening. Plan B was then to stop at Thatcham instead and G would fetch the car back from Aldermaston. However the 14 day moorings below the lock at Thatcham were full with some of the same boats that had been there when we last passed on 7th June. Local intelligence was that we should get to Froud’s bridge marina above Aldermaston lock in less than 2.5 hours so we decided to press on reverting to Plan A again. 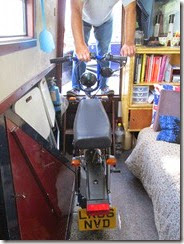 back that the lock was padlocked closed and the canal the other side of it was empty of water due to a weir collapse further downstream. CaRT were working on the problem but did not think the section would be re-opened until tomorrow. So we pegged in and joined the merry flotilla waiting above the lock for it to re-open. G used the Di Blasi to fetch the car from Aldermaston.