A busy but eventful day, but boy, was it hot. As we left the mooring at Froxfield a hand appeared from a porthole in Lee’s boat and he waved us off. He’ll be heading towards Bath during the school holidays. At least he’s still in education, and Pip the dog, which is more than can be said of Mr Gore after the cabinet re-shuffle.

There was a cruiser descending down through Oakhill down lock but they refused to share with us as they claimed they were too wide to do so, If they trusted us and removed the space hopper fenders then I’m sure they would fit. So we ploughed on slowly towards Hungerford with G. on the trusty 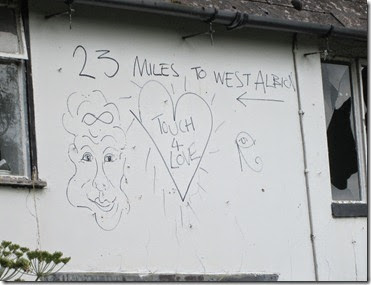 lock bike and me bringing Jannock behind. We were following another single boat but never managed to catch them up before they moored at Hungerford. Some-one has defaced this empty lock cottage, who would even think to do this, or that it is acceptable.

At Wire lock we met the horse drawn 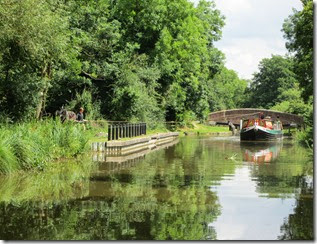 trip boat coming up so we held over and hovered on the offside so that we were not in their way, which would have been the case if we’d gone onto the lock landing. We had already met the other wide beam trip boat, full of Cubs or Scouts, coming up through Denford Mill lock earlier.

From there on all locks were shared with a sequence of partners all the way to Newbury. After Kintbury we decided to moor in the shade of an over hanging tree for an hour where we met an interesting passer by. He told us how a boater was recently arrested for Drunk-in-Charge  after causing damage to structures and other boats in the Kintbury area. 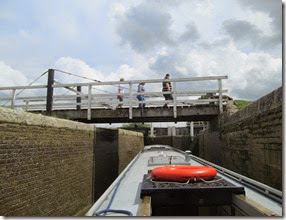 We moored above Town lock in Newbury, under another shady tree. Two firsts : our first fly-past of the year, a bit late so we made it a good-un, the whole Red Arrows team, 10 plus 1. And then it was the first time this year that I have thought it would stay warm enough at night so we’ll need the double glazing removed and the windows opened.

Boaters Note – Newbury High Street now has a Morrison’s Lite that is open until 11pm every day. Don’t forget to visit Griffins, on the town bridge, for pies, ham, faggots and so forth. Recommended by us for years.