Cor, wot a scorcher! Wall to wall sunshine and beautiful countryside basking in it all day. Although we met a lot of nice people today we had to 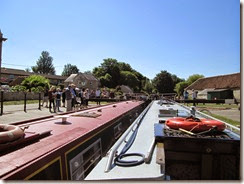 declare it ‘Batty Boater Day’. We untied and set off towards Bradford lock just as the rush hour started. We met our first as we waited to join the mayhem at the lock.. Boats were going up in front of us and the world and his crew were bobbing about above waiting to come down. No. 1 gent was on his first ever boating trip, on a 70 footer with just very elderly parents as company. He was having 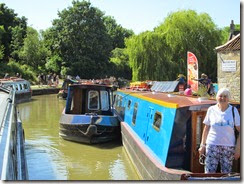 to do everything himself, single handing in effect. He wasn’t finding it as easy as he was expecting. Mum said that they were going to do Caen Hill. I asked if they knew what they were in for. Oh yes! they’d seen a picture of it and it looked pretty. Of course it would be for Mum and Dad, but poor son was in for a hard time, especially if they didn’t have a large crew to share with. We suggested that it might be a flight too far but they were insistent that they wanted to see the countryside beyond Devizes. And then do it all again to get back I pointed out. Son asked how long it would take as he didn’t believe the 4 – 6 hours that he’d been told. I said that was likely and there was no rest between locks, no stopping for a cuppa, once you started the main flight. Mum said it would be fine as there were staff there to do the work for you. Not likely! At this point son was looking a bit dubious so I suggested that they go to the bottom of the flight and have a look, watch a couple of boats, before deciding whether or not to ascend. They have another week left of their holiday – shame if they can’t make it up. I asked if they had a ‘Plan B’ – if son got an injury or had his muscles seized up after doing Caen Hill. Blank looks all round.

We stopped at UKBoatyard at Hilperton and filled with diesel at 77p per litre (plus tax @60/40) as well as a new set of cabin batteries as we’ve been having fridge problem during the last few nights. Shortly after leaving there, a lot poorer, we pulled over under a shady tree and Graham swapped out the batteries. 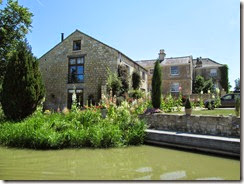 Next in the numpty medals, Gold, was a bloke aboard a wide, sea going, cruiser. He could not share locks – too wide – and was single handed. He’d come in off of the Severn at Bristol and was heading for Caen Hill very slowly indeed – what is it about this location? He was not prepared to let anyone overtake him as he was already well behind his schedule due to having one engine go faulty on him. He had not taken advice and called into a marina to get this sorted – he just tied up to a bridge landing stage and caused agro for every-one else whilst he bled the diesel injector system. We pointed out that Graham was on a bike and could open the swing bridges for him but he was having none of that. G promised to back set the locks for him if he let us overtake as there was no way we could cope with following him. He was taking a good 5 – 7 minutes just to tie his boat to a lock landing. Eventually we reached a lock with a single narrowboat entering and so we passed him to share the lock with them – result!  We then ended up with new partners at every lock up the Seend flight except the last two. Frankly to me he was a danger to himself as he was having to climb up the lock ladders before spending ages fussing about the correct tethering of his cruiser before even thinking about what needed to be done with the gates and paddles. Graham used the bike between all of the locks and swingbridges on this section so that the delays were kept to a minimum once we had overtaken Captain Slow.

We stopped for the night at Sells Green where G. put the old batteries in the car and then we treated ourselves to a night out at the 3 Magpies In again. The rump steaks we had were the best we’ve had for a long time. The ice creams for dessert were yummy too.

Looking forward to Caen Hill tomorrow, lets hope we can find a good partner for the flight.