Brenda has a 3 knicker day

Dear Met Office, it’s not so much that the weather you forecast was wrong, it was just that the timing was well out. Rain in the morning, you said, thunder and lightning before lunch, clearing up with the coffee and petit fours and a Pimms afternoon to follow. I should cocoa! It rained a little as we traipsed our stuff from the car to the boat, stopping as passing boaters donned their waterproofs and then starting again as they took them off in the warm sun. 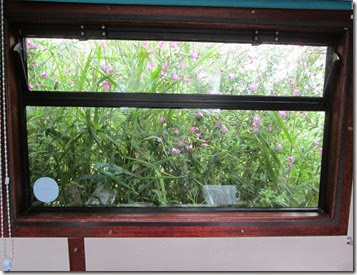 The moorings on the K&A are quite unique – there are not many places where you can see the towpath from the boat.  We set off under a clear blue sky but only got as far as Heales lock before the rain started again. We were soon soaked through and so decided that stopping above Woolhampton lock for lunch would be a good idea. I cooked and then crafted whilst Graham ate and then did indoor bicycle maintenance. One and a half hours later 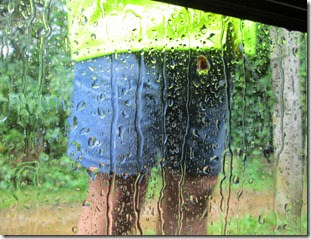 the skies cleared and so we decided to set off again in a fresh set of dry clothes. We had just committed to the Woolhampton lock, weir stream and swingbridge combo when the heavens opened with an even heavier rain storm started. To our shame we just tied onto the end of the bridge moorings and sheltered.  Two thunderstorms later and G had completely washed the boat and dried off and changed.

We finally set off towards Aldermaston once it had stopped but still had to grab waterproofs now and again. We met some day boaters who were very damp but still enjoying themselves. At Padworth lock we shared with a hireboat that had reversed down from the wharf in order to wind below the lock. A good idea but it would have looked strange to any passers by – one boat facing each way. It’s the first time we’ve ever shared a lock like that.

So, two complete sets of clothes so far, and that was all for G. My third set was needed after Tyle Mill lock. We stopped on the water point to fill the tank. the tap was so close to the filler that we only needed the short hose, usually used between the reel and the filler. I put it into the tank, as usual and did other things, as usual. As I stood with my back to the tank filler the hose came out with such force that it whipped about and soaked me in the process, head to toe, all layers. It’s a very powerful tap here ;^) A complete change of clothes was needed again, but only for the back as the front was completely dry. We moored for the night in the meadow, across from the services, and after supper we watched the sun go down on the port side whilst big grey clouds scudded past on the starboard.

Thames Valley Police had an open day at Sulhampstead College and had a dance in the evening afterwards. The band were loud but not that good at a distance. First plums of the year picked today.

P.S. When I typed the word ‘knicker’ in the title the software indicated that it was spelt wrong. When I did a right click to see what the suggested correction was the list contained “knickers, knocker, knacker” That made me laugh out loud.

Part timers today and the Met Office got it spot on for a change, a lovely 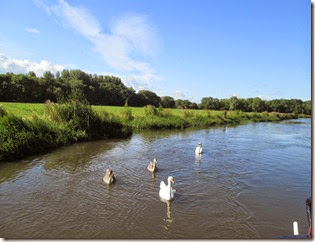 morning in wonderful countryside. The river Kennet is running faster after all that rain yesterday. Our first 3 locks were set in our favour today and the fourth (and last) was shared with another boat so an easy morning. If only we had sat out yesterdays weather then we’d have less wet washing to take home.

Graham caught two crayfish last night so they were prepared for consumption – two more invaders despatched. We moored outside the Cunning Man at Burghfield and went for Sunday lunch there. The food was very good and when we came out we noticed some excellent blackberries in the carpark so we picked two pounds of them as well. They are very large, possibly cultivated, berries with loads of flavour. We then took the blackberries and crayfish home leaving Jannock well pegged in until Thursday.