We started the day in brilliant sunshine, which faded to rain as we cruised 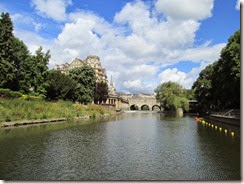 West, clearing as we returned towards Bath. We prepared to abandon our breakfast as another solo boat was coming down Bath locks and it would be good to share the 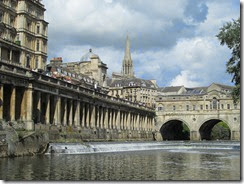 last three with them. Not only did they disappoint us by deciding to moor in the same pound that we were in but they added insult to injury by then cooking a full English breakfast whilst we returned to our now soggy cereals.

They had trouble pulling in and mooring so we suggested they use the centre rope which they had only used for overnight tying up, along with perfectly adequate bow and stern ropes, until now. They then decided that by using the centre rope they would be able to get their boat ‘in’ without it ending up sideways. 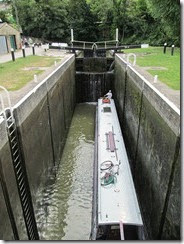 We finally set off solo and passed down through the last three locks and out onto the river. We turned right and went up to Pulteney weir for some photography . Mooring in the city centre is currently suspended and so there were no other boats for the tourists to photograph. We woz snapped and snapped again. We then turned around below the weir and set off downstream for a pleasant days cruising and bird watching. Swineford lock top gates leak so much that it is almost impossible for a single person to 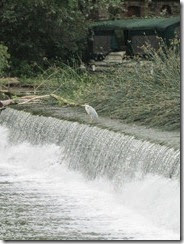 open a bottom gate when the lock is empty. Whilst waiting patiently for the levels to equal, I spotted a heron fishing whilst stood in the middle of the adjacent weir and then observed a wagtail snatch a dragonfly from mid flight. It then took it to the lock landing and demolished it, leaving only the wings as evidence. It was a novelty to scatter flocks of gulls from the water instead of ducks.

Best of all though was a jewel of Kingfishers. We saw five in total, two of whom were having a right barney over territory. We met up with and shared all of the locks down to Hanham with the same hirers we’d come across at Bradford-on-Avon on Saturday. They were continuing on through Hanham lock to go to Bristol but we’d decided to turn around and moor for the night on the pontoon  adjacent to the Sustrans cycleway near Swineford.

Today we discovered a twin for ‘St. Barbies’, 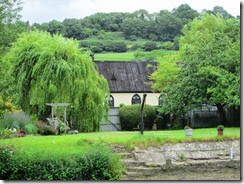 the pink corrugated iron church that is adjacent to the canal at Hassell Green on the T&M. This one is near Saltford lock on the Avon and is painted clotted cream yellow, it looks lived in.

At most locks, BW/CaRT have posted this notice about the temporary closure of the moorings at Pulteney. Does the second paragraph make sense to you? Especially as some of the locks are miles from the centre of Bath ;^)

Blimey, Brenda, who'd've thought a wagtail could demolish a lock landing.....
Sorry. Just to prove I'm reading about your travels on our local waterway - most enjoyable.
Baz

Thanks Baz
Maybe I should have used the word devoured instead of demolished. Whatever - there were only the wings left once it had finished.