Half past eight and we’re off from our lovely peaceful 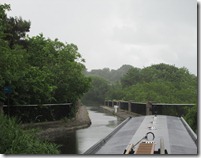 rural mooring, so I thought I had better get out of bed ;^)  Immediately we cruised through a strange landscape; natural or industrial spoil tidied up by mother nature – better look that up. (Bridge 38 – Fawns Park Bridge) Could it be Fairnie Hill? As we went along natural seemed the answer, there were outcrops all along what would have been a sandstone ridge.

We passed Ian and Anne’s boat Gamebird moored at Drumshoreland, We’ve not been able to get hold of them to let them know we are on their patch. 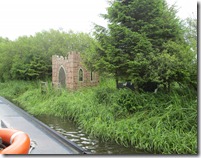 Graham spotted this shed disguised as a castle on an island in the canal just before Ratho. We approached Edinburgh as our tummies approached lunchtime. When on holiday you have to try new local delicacies. I warmed up a couple of Macaroni pies. They will have to go on my repertoir. G. normally dislikes macaroni cheese but declared that the pies were nice. Macaroni cheese in a pie case, what’s not to like?

As we finished our lunch we met a sequence of four wide beam trip boats heading West. The passengers in the fordeck of the last one offered us sandwiches from a vast and varied selection. Sadly we declined. Half an hour earlier would have been different. 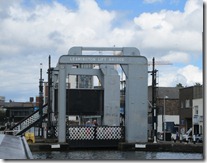 in the Quay area. There was a very strong wind rushing down the canal at the winding point and G. had great difficulty turning Sonya around as the wind was pushing the bows around faster than he could turn them. In the end he had to rely on the end of a pontoon to act as a pivot point in order to get the boat turned around. We then moored against the North bank pointing West again. 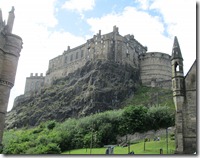 The sun finally came out again as we went for a tourist mooch around Edinburgh, we avoided the crowded areas find little alleyways to take us to interesting places. A lovely city. As we walked back towards Sonya our tummies made themselves known, normal food time is 6pm and that is usually too early for a lot of restaurants, but just 5 mins from the quay we happened across the Guchhi Indian Restaurant. We went in and although we were the only customers there, boy was the food good – in fact so good, they get the full plug :-

Guchhi, 50 East Fountainbridge, Edinburgh, EH3 9BH – 0131 228 6666 www.guchhi.co.uk  they deliver takeaways between midday and 3am. We joked that they didn’t do haggis pakora (Graham is detemined to find some in Glasgow) on the menu but were told that if we had asked for it, they would prepare it. Never mind, we’ll save that delicacy for Glasgow. 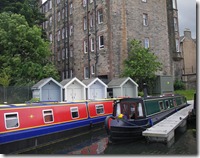 We looked up Dormouse to try and identify what G. saw yesterday and apparently there are none in Scotland. He’s still wondering what it was he spotted on the bankside.

P.S. I love the little ‘beach hut’ type sheds all the Scottish Waterways residential moorings get.