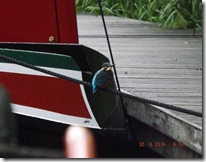 crew. As I was making our early morning tea I spotted a kingfisher had perched on the bow rope of the boat moored in front of us. It watched the water and then dived down to take a fish and bring it back onto the rope perch to eat. It then started scanning the water again. I awoke Brenda and we both took as many pictures as we could beofre it flew off. Pity we couldn’t get any shots that were not through the front windows. 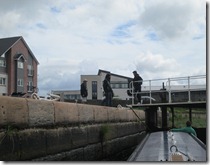 We set off and arrived at lock 16 to find that we were in the capable hands of four Re-Union volunteers for our journey down the thirteen locks to visit the Kelpies. As we passed down the flight it is obvious what work was undertaken to make this canal re-navigable. You come to a new lock, identifyable by concrete walls and stainless steel fittings, rather than the usual cast iron, which takes you under a road bridge. You then pass through the gate-less original lock the other side of the bridge. 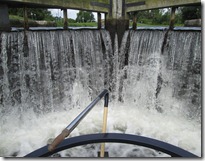 the cill is because of the amount of water cascading over the top gates, today I did a first and ‘cilled’ the rudder. This dislodged the bottom of the rudder post out of the lower bearing before we slid off of the cill. I thought I had managed to refit it OK whilst still in the lock because the rudder moved correctly again and I was able to steer down the rest of the flight. But on arrival at our Kelpie mooring the water was so clear that I could see it was still not seated properly so I had to refit it again. It doesn’t matter how experienced you are it is still easy to get caught out. 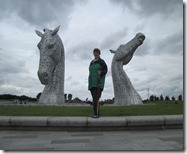 When our volunteers tried to access the Re-Union boat in the basin to have their break, they found that they had been given the wrong set of keys so we hosted them for a cuppa on Sonya. Once they had 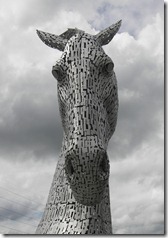 finished and set off up the flight with another boat, we lunched and showered before going for a walk to explore the Kelpies and the new Helix link to the River Carron. 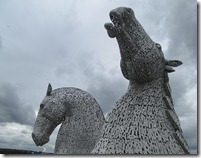 We are now awaiting it getting dark so that we can see the Kelpies lit up at night time. It’s going to be a late night tonight as it doesn’t get dark up here until about 11pm (and now it’s started raining again at 9:50pm :).