Today was the end of week one and time to go to Bowling, where the Forth and Clyde canal meets the River Clyde, so we needed an early start.

8am and the first drama of the day, a seagull swooped into the basin and took a fish. Unfortunately the fish was bait on a fishermans line and the seagull became tangled up. The gull became distressed and the sky above immediately filled other gulls who started to dive bomb it, pecking at it. Talk about kick a man when he’s down! The fisherman and his mate fetched a large landing net and reeled the gull in to land it. 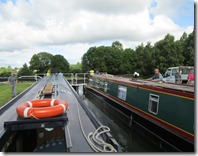 Poor fisherman got clawed and pecked for their troubles whilst they tried to release the gull un-harmed. When they released it the flock returned and had another go at it, nasty creatures gulls.

Once this drama was played out, I reversed the boat out and winded in the basin so we could make our 9am rendezvous at Maryhill top lock. Once nb Gosling (crewed by the Aussies we met at Linlithgow last week) arrived we were off down the locks ably assisted by six Scottish Waterways staff plus eight volunteers. We soon fell into a routine with Sonya leading and Gosling following.

hollow in the undergrowth on the bank enjoying the Glasgow sunshine. Can you spot it in this picture? (Clue :- Just one ear clearly showing) It seems that few boats pass this way so it wasn’t surprising it didn’t try to hide, just looked puzzled as we passed. Then further on there were a group of terrapins basking in the sunshine between downpours. The clear water here must suit them well.

At Boghouse top lock we took on a cabin boy. A lad and his Gran were out for a walk. He was very interested in the boats and his Gran asked if he could come aboard. Of course! He was very nervouse about the step down into the front well-deck but finally joined Brenda there. He explained that he’d just done canals at school, he was nine, he’d never been to England and was probably the only one in his class who’d been on a canalboat. He got off at the next lock, spoke with Gran and then turned to ask if he could ride to the next lock as well. This time Brenda sent him down the back to experience the noisy end. As we finally bade farewell he tahnked us and said we’d made his day – he was so chuffed!

Onward to Clydebank shopping centre where there was a ‘sail through’ fish and chip shop. Based on a boat, it has a serving hatch canal side for passing boats to order, pay for and collect their fish and chips – genius. We’d have stopped to get some to heat up with our dinner later but were not sure how Gosling would cope with us suddenly stopping in front of them – normally the locking crew take a break here but we were running late due to the late start.

And then to Dalmuir drop lock. We were informed by the wonderful Scottish 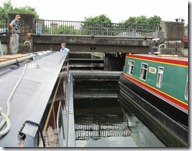 Waterways locking team (now down to four as the volunteers stopped after Clobberhill locks) that it is the only one in the world. You enter, the water in the lock is pumped out so you drop to the lower level, you then move under the raod to the other side where water is allowed back in to take you back to canal level again. It takes approx 40 minutes to pass under this road. Apparently it can take up to one and a half hours for higher craft to pass through.

All together we transited eighteen locks and eight moveable bridges today, all operated by Scottich Waterways staff – brew breaks built in and usually a lunch stop at th F&C boat but not today as we had a delayed start.

Once into Bowling basin, the Scottish Waterways staff indicated which moorings we should take and assisted us by pulling on ropes to get us in there. I went and investigated the shower block and then used it to make myself presentsble again. We then went for a walk around the basin and the village including a vist to the local pub. Then back to the boat for dinner just as the heavens opened with a really heavy thunderstorm. We have been so lucky with the weather today considering it was forecast to rain all day. Lovely sunshine with occaisional showers all the way down.