We had a lazy start this morning as we were booked for the 11:30 bridge lifting.

Obviously the Police Scotland Marine Search rib can get in and out without the bridges being lifted as they paid us a visit just after breakfast.

Once released from Spiers Wharf we made our way to Stockingfield Junction, avoiding the Partick Thistle lagoon (no fisherment today so no fun) before turning right back towards Falkirk. The Aussies on nb Gosling were in front but Sonya naturally cruises at a slightly higher speed than them so Brenda overtook them on the straight just after Lambhill bridge.

of scotch pies and salad followed by a medley of fruit cake and fig rolls. We stopped at Kirkintilloch for a re-provisioning visit to Sainsburys. We then moved on to Hillhead Bridge where we were joined by Gosling and a Marine Cruises hireboat to wait for the Scottish Canals staff to open the bridge for our 3pm booking. Even though all three boats were there waiting in full view, they sat in their van until 3pm before they opened the bridge to let us pass through.

At Twechar bridge we all waited again for a few minutes until they arrived to open that one as well. The requirement to pre-book lock and bridge passages 24hours in advance is the biggest problem with cruising the lowland canals as it restricts your ability to linger in one place or not bother stopping at another. I understand the requirement as it allows manning levels to be predicted and makes arranging the necessary staffing manageable but the need to be able predict when you are likely to be where must be very difficult for newcomers to these canals. I am sure that if we visited here again our cruising plan would be very different.

Once through Twechar bridge we moved on to Auchinstarry marina where we pulled over to empty our rubbish bin. The other two boats were stopping here for the night but we continued on for another half hour before stopping on a lone pontoon that I had spotted out in the middle of nowhere last Thursday.

The pictures below show the views to port, starboard and full ahead from Sonya’s front well deck. Wonderful – and located in an SSSi as well. 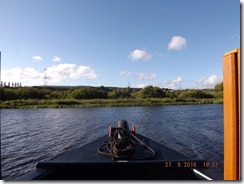 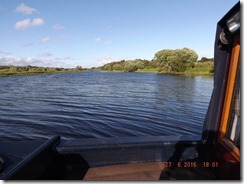 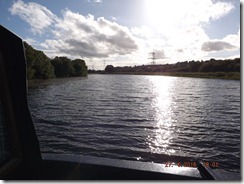 Dinner had been cooking for most of the day whilst we travelled, The £2.52p Brisket of Beef

from Tesco, cooked with carrots and barley. This local delicacy was accompanied by a fine Chilean Cabernet Sauvignon Carmenere provided by my work mate John when he visited us last Saturday.

buttter-dish” - not a lot you can add to that. It must have been the wine talking. Whilst dining we spotted a rainbow out of the window, the picture of which has a reflection of the opposite window in it – enjoy.