On the move again

Today we saw all the usual suspects – Kingfishers, pirates, Spitfire, Hurricane and other Cutweb members.

We un-pegged and Brenda set off solo southwards whilst I moved the car down to All Oaks Wood where it’s much easier to unload all of our stuff from the car into the boat. That’s the trouble when you let others borrow your boat – you have to give them room to store their clobber. Jannock appears to have taken a hefty clout whilst moored at Stretton for the week, The fridge had moved so far that the door would not close and the stereo had popped out of it’s ISO mounting bracket. 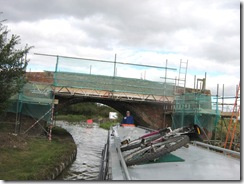 so we fair flew up them as well. We passed 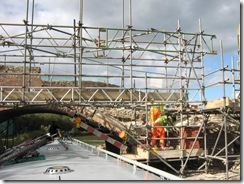 nb Floating Asset moored outside the Royal Oak at bridge 73, no sign of the crew though so they must have been inside the pub. The repairs to bridges 79 and 80 are coming along a treat, they’ll soon be fully open again I reckon. Just before Willoughby wharf we had a ‘speed mini-GiG’ with two other Cutweb members. Mike and Krystina aboard Draco and Success passed us at the same time as we were passing moored nb Rosy belonging to Bill and Fanny the dog. She was keeping an eye out of the open back doors but there was no sign of Bill so he must have busy inside.

Just past Braunston turn the Narrowboat Trust were loading with coal. Brenda enquired whether their load was a whole 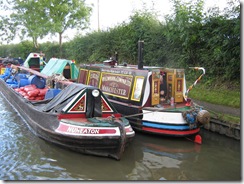 ‘minefull’ and was told that it was actually 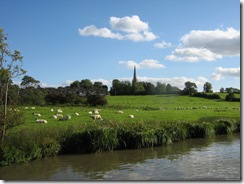 being mined from beneath the canal through a hole in the bottom of one of the boats. It was also pointed out to her that Gnomes do all the mining in Northants.

After a waterfill and a self-pumpout at the sani-station it was ‘no room at the inn’ as far as the visitor moorings in Braunston were concerned so we passed up the first two locks in the flight and moored in the Admirable Nelson pound. Dinner was roast lamb that had been cooked to a treat in the trusty slow cooker for most of the afternoon followed by lemon cheesecake.

Since we were moored so close, and since it is open for business again, we felt it would be rude not to try out the newly re-furbished Admiral Nelson. It’s a very different pub from when we last visited. The decor is fresh and modern, food appeared to be more restaurant than bar snacks, with 3 beers on handpump although the Dizzie Blonde was a bit cold when served. The pub was heaving with a birthday party for 75 people going on so there wasn’t even room to bring a cat, let alone swing it! They do advertise Fish and Chips, eat in or take out, which could be useful to boaters as it’s an easier walk than up the hill to the chippie in the village. Mind you, £7 a portion – you decide!