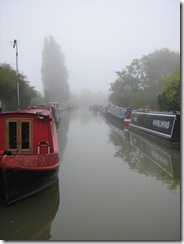 After quite a cold night, this morning everything was shrouded in mist when we awoke. I took my time preparing to set off down the Stoke Bruerne flight in the hope of someone coming along to share the locks with, but no-one came ;^(

We finally made our way into, and down, the top lock just after 10am and passed through the second lock solo as well. After the long pound I arrived on the bike to turn the next lock and noticed a single boat passing down through the lock ahead of us – they had pulled off from the 24 hour moorings in the long pound. Due to a boat coming up the flight, they back set lock four and waited for us to join them in the next. We then shared the rest of the flight passing northbound boats in every pound.

At the bottom of the flight, on the offside there was a sign that asked the question “ What if the ‘hokey cokey’ really is what it’s all about. That amused us. Between the bottom of Stoke Bruerne flight and Cosgrove we passed three separate  fishing competitions. The two smaller ones had about 7 or 8 cheerful anglers taking part whilst the other had about 20 or more split into two groups by a bridge in the middle. It was noticeable that those sat north of the bridge were a miserable lot whilst the rest, south of the bridge, were smiley and happy to chat. We commented on this to one of the smiley anglers who said he would mention it on their return journey home tonight. Oooooooooops, I hope we haven’t caused any hassle.

Baxters Boatfitting Services at Yardley wharf was closed but we liked their sign on the gas compound fence – it read ‘Shut Happens’ which caused yet more amusement to the Jannock crew. We passed through Cosgrove lock on our own and then continued on to find a suitable fourteen day mooring before locking up and heading home.