During my early morning car shuffle, just as I was approaching the car park at All Oaks Wood, the Di Blasi went all funny as if it had a rear wheel puncture and became un-ride able. Luckily I wasn’t going too fast and managed to stop easily without 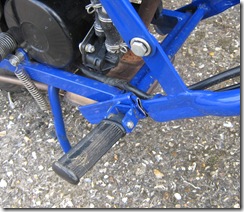 falling off. On inspection, a part of the frame had fractured causing a mega-wobble when loaded with my weight. I pushed it the last 100 metres to the car and then re-planned our weekend journey during the drive back to Braunston to ensure I could walk back from our final destination.

As we were preparing to set off the crew of the boat moored behind us were doing likewise and so we shared with them, joining the end of the queue for Nelson lock. Good choice as otherwise we would have shared with a crew of Dutchmen on a Rose narrowboat who were full of enthusiasm but very short of understanding or technique. One poor chap was up to his ankles in mud as he hung onto a mooring rope, wearing only flip-flops and socks on his feet – yeuch!

As we exited the top lock we met the queue coming the other way. At the tail end were another two boats with all male crews, bedecked with beer bottles and under very little control. One was doing a sterling job of coming down the canal sideways even though it had to straighten up every time a southbound  boat wanted to pass it. In the tunnel we passed another similar crew, on a Viking afloat craft, who showed no signs of over indulgence – however once they had passed us (luckily without touching) a very strong smell of beer filled the air. Shortly afterwards we heard the very loud crash as they hit the boat behind us, our partners up the flight, who suffered quite a bit of damage to the paintwork. They were upset as they had borrowed the boat from friends. 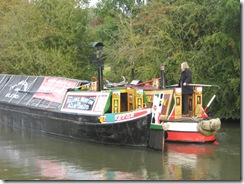 cold lamb left from yesterday – only 3 months out of date though so nothing for a curry really. Once we’d moored up I set off for the walk back to Braunston to fetch the car, it was easy until I had to climb over the top of the tunnel. I now know why the southern end of Braunston tunnel is always so drippy. It has a stream running across the top. The first part of the path was very narrow and muddy but once across the main road it changes to a dry metalled lane down to the towpath which is still a quagmire in places.

I returned to the boat, we closed up and headed home just before the rain started – excellent timing yet again. I do believe I’ve seen almost as many working boats in Braunston this weekend as during the show – it’s just there was no parade ;^)