Never go through a tunnel within 24 hours of Laplander passing through. 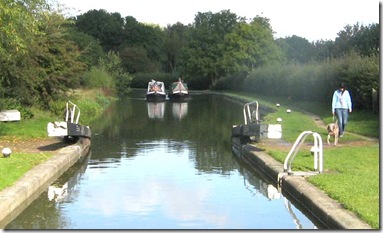 flight with. They were just descending the top lock, outside the closed Navigation Inn, as we arrived but waited at the second lock for us to catch up. As we descended the bottom lock we espied an ABC hire boat approaching and so we left one gate open for them and set off towards Weedon. It being their first lock they had more than a little trouble entering via one gate, but then it hadn’t occurred to them to put some crew ashore to open the other gate. Once in the lock nothing happened for quite a while, until eventually we could see a figure climbing the lock ladder. Again nothing appeared to happen apart from the second gate being opened again. As we lost sight of them they were reversing out of the lock again. We passed another boat travelling towards the lock so we hope they got some help.

Just after Bugbrooke we passed Laplander in full steam, looking splendid in the sunshine. We later found out that they had passed through Blisworth tunnel that day as it was like a London smog in there. Mind you, we’ve passed through there in the past when the atmosphere was clearer yet our eyes were streaming and throats were sore by the time we reached the other end. Laplander isn’t asthma inducing; very smutty but no heavy breathing. As we left the tunnel to find an overnight mooring at Stoke Bruerne we spotted a fellow Cutweb member and good friend, J P, on the tunnel trip boat. Now that was a surprise but when he visited for a chat after we’d moored up and before he returned to Braunston, he explained that he was there for the CBOA AGM.

Graham used the Di Blasi, now newly fitted with a replacement frame section, to return to Welton to fetch the car before a roast chicken dinner that I had been cooking all afternoon in the slow cooker.

Today's store cupboard challenge was a pack of Wrigleys chewing gum that I found during my mega-cupboard tidy yesterday. Graham tried one stick and it was horrible with a lumpy rubbery texture, score 0/10 and not even food.