Having heard that hurricane Bertha will be sliding past tomorrow we made a prompt start and were in Abingdon lock by 8am whilst lockies were still having their morning cocoakrispypops. As we entered it was obvious that a little cruiser had decided to share with us and was storming up towards the lock. Such was their haste that Mrs cruiser was still in her nightie and slippers whilst working through the lock and then filling with water above it. Once we’d brimmed Jannock’s tank we had a pleasant and un-eventful cruise up to Oxford. At Christchurch meadow there were no pleasure boaters to scare us, just a few eights and sculls. We eschewed Port 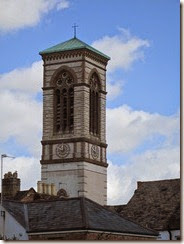 Meadow as the wind seemed to be building up and went onto the canal and through Jericho instead. Jericho boatyard is still flapdoodle and College cruisers still appear to be operating from their base although the ground next door has been cleared. The wind brought some rain so we pulled over before Wolvercote lock for lunch.

Just as we were finishing, a boat was coming down so we set off and went straight into the empty lock. It was ‘Britains Premier Pirate Party Boat’ operated by Oxfordshire narrowboats, Yes really! The eight crew members that we could see were all 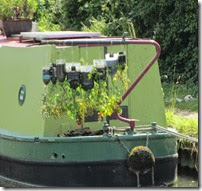 a bit befuddled but we did find out what Pirates eat for lunch : booze and pot-noodles. Graham commented to one lad that it looked like a really healthy lunch. Irony. The reply was “there is sweetcorn in it!” Touche’

We saw this terrific way to grow tomatoes – hung upside down so that the rain keeps them well watered without any effort. 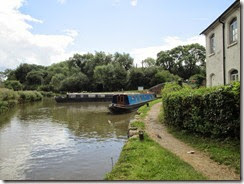 At Dukes lock we found a hire crew had moored their lengthy boat between the bridge and the lock mouth and gone in search of a pub. That will make life difficult when the traffic builds up in the afternoon. Above here we met another Oxfordshire boat that had real pirates on it. Real pirates wear real pirate uniforms, they have hats and ruffled shirts. They also have lady pirates all glammed up. Real pirate lunches are picnics, on water points, and they slosh glasses of  Beaujolais Nouveau or Malmsey wine. We  saw!

An then there was the crew coming down Roundham lock who had to called back from the lock mouth, where they were waiting to reboard their boat, to wake up their steerer who was just not aware that the gate had opened and he was needed to start moving. It would seem he’d fallen asleep whilst the boat descended in the lock – they say the canals are relaxing ;^)

On through Thrupp, passing Nuneaton and Brighton moored outside the cottages and on to Shipton Weir lock where we were joined  by a single hander. Due to the shape of this lock we were both able to share, but once in he was having an awful time working out who was needing to go out first, mixing up the concepts of first and second. He admitted having cruised to the pub and was still supping from a can as he cruised home. It’s enough to send you teetotal for a couple of 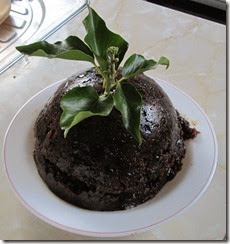 Tonight’s dessert was a Heston Blumenthal candied orange ‘stuffed’ Christmas pudding with custard – remember them? Graham found it in a cupboard and decided that now was a good time to try it. Slow cooked all afternoon, it was delicious. We even shared it with the boat moored behind us – after all, it says to serve 8 – 10 people.