Once the kids in the campsite opposite and RAF Benson’s helicopters had given up and gone to sleep we had a lovely quiet mooring for the night. We set off just after 9:30 and headed for Benson lock. Once through I decided it was shower time and so left Brenda in charge. 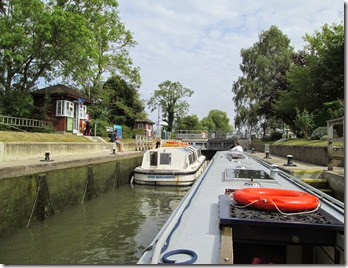 The next lock was Day’s lock, no dogs requiring rescuing this time ;^) Once through, sharing with a Salters trip boat, we made our way towards Clifton. En-route, we had discussed visiting the Plough at Long Wittenham for lunch but decided against it. Turning into the Clifton lock cutting we found a lot of boats, including the Salter’s trip boat. The lock was closed UFN (until further notice) due to a hydraulic failure so we moored alongside another narrowboat at he front of the lock landing leaving the rest available to the multitude of cruisers that arrived. The Salter’s trip boat turned around and headed back towards Wallingford after discussing the matter with their passengers as the keeper had said it may be tomorrow before some-one would come to fix it.

After two hours, a bloke wearing dungarees and carrying a monkey wrench arrived and started furkling around down a manhole and managed to sort the problem. We were then let into the lock to test it and were soon through once he’d finished. To celebrate getting through Clifton lock the Red Arrows flew over in formation as we were leaving. 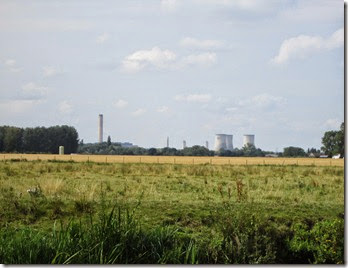 On through Culham lock and on to Abingdon where there was an acute shortage of free moorings available. We finally managed to tuck ourselves in between two other boats alongside some reeds. Matt and Alice were coming for dinner and arrived just as the rain started, which lasted all evening.

Brenda would like it to be known that she is not dirty because she showered once I had finished.

Enjoyed your Blogs. My Husband Dick and I are toying with the idea of Liveaboard and are hiring a boat next year to tackle the Cheshire Ring. We are friends of Dick and Irina ! Happy Cruising
Deirdre

Hello Dee
Thanks for leaving the comment - we're glad that you enjoy the blog. Get in touch if you want any assistance with route planning, hope you are taking crew with you cos there are a lot of locks on t
part of that ring.
Graham