And onward to Stone

Wildlife of the day – A pretty Lapwing with two chicks.

After a very peaceful night and a bit of a lay-in we finally set off towards Handacre just before 10am. In Rugely, whilst I was in the shower, Brenda had a spot of trouble at bridge 67 where she met a cruiser who was not looking ahead and tried to pass through the bridge whilst Jannock was blocking it. After a poor exhibition of reversing by the cruiser, she was able to get into a gap in the moorings to allow it to pass 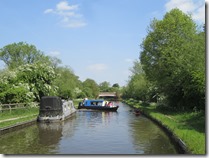 This incident was almost immediately followed by a joint canoe/dayboat debacle once we had crossed the aquaduct on the way out of town. The canoeists were awaiting one of their party to join them from the bank but were hanging around right opposite a moored boat – reducing the navigable channel to about 40% of normal. The dayboat decided to go into the bank before the moored boat to allow us through but was using his tiller back to front – a common newbie issue, however he couldn’t stop his boat so avoided a crash by powering out past it. Luckily he recovered and we got past so I offered him my best advice – Point the front end of the tiller at what you want to miss!

the day – anyone with a better hat after 12:15 will have to be dissapointed. However, the receipt of this award has somewhat diluted the importance of yesterday’s bunting award.

At Great Heywood junction we stopped at the water point to fill Jannock’s tank. Brenda walked our rubbish to the skip and returned with a nice glass plant pot. Last time we visited here she found a nice hat in the skip and this has now 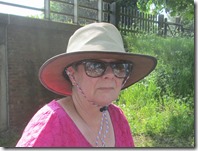 We continued on, experiencing that rare event – every lock in our favour, to Stone where we moored up for the night on the five day moorings behind he Scout hut. I’ll do a car shuffle tomorrow morning before we continue North.