Last night we heard the most wonderful tale from a volunteer lockie at Audlum: the subject under discussion was new paintwork. He had come across a woman laying down towels on the lock walls. I had visions of beach towels on deck chairs. She wasn’t reserving her place though, the towels were to protect her boats new paintwork from damage – bless!

4:30pm – cabin temperature after 3 hours moored in the shade was 34 degrees – Scorchio plus!

We set off at tweet o’clock to complete the rest of the Audlum flight in the relative coolth. 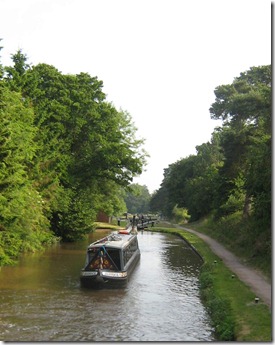 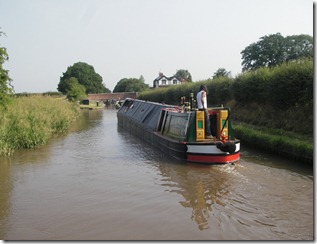 Then up the Adderley five as well before an early siesta, with bacon sarnies, above Adderley wharf bridge.

We relaxed in the shade of the trees and read until we heard the water moving along the cut and saw our boat start to move for no apparent reason. Then we noticed that the boat that had moored on the top lock landing for over an hour, to the detriment of other lock flight users,  had moved off and started to plough a furrow up the centre of the cut. Talk about a bow wave, even his bow wave had a bow wave! As nb Pheonix passed where we were moored he opened up the throttle. to our disbelief he had actually slowed down to pass the moored boat. It is the first time that we have ever been able to hear the wash making more noise than the engine. Jannock was left bobbing about for at least twenty minutes after he had passed. Because of their ages we assumed that the boat was borrowed. Please dear owner, if you get your boat back unscathed, please don’t lend it again to the the guy with two kids who looks like Lee Nelson without a stiff talking to first.

Then on to Market Drayton where Graham went off to do a car shuffle and I did the second wash of the day – great drying weather.

After he returned we wandered into town in search of an evening meal – Graham said he’s take me out!  The Crown, is a Marston’s pub – renowned for being a food chain – stopped serving food at 5pm. There was sport on the TV and ‘garage or techno’ style music playing on the sound system. Not surprisingly it was empty. 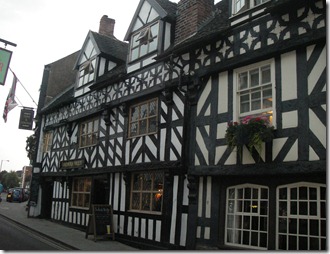 decided we had to try the Sandbrook Vaults which advertised the fact that they sold Joule’s Ales which are now brewed in Market Drayton but were last brewed in Stone in 1978. Graham tried the Blonde (brewed using Saarz hops) and the IPA. They were both very good.

The barman informed us that there was a Wetherspoons in town – Graham was disappointed because he had a wallet full of CAMRA 50p discount vouchers and I insisted we visited Asda on the way back to the boat instead ( a short walk down Stafford Road from bridge 63. We also found a home brew supplies shop in the town centre – good job they were closed.