July Holiday–Day #1 - All is revealed

Bird of the day – Sacred Ibis

The sight that greeted me outside my window this morning was more male stripper than Calista Flockheart. It would appear that last night’s  ‘young lady and her minders’ were the Groom and Groomsmen – a two boat stag party of whom the advance party of five had arrived early by car. And didn’t we know it from about 01:30 onwards. A night cruising boat with three crew came along the canal and prompted the start of the stag party noise which continued on until about 3 am.

Two more early morning boats passed us by about 7am  and the next movement was from the stags. I looked out my window to be greeted by (Sexism Alert!) a pair of hairy thighs and a pert bum in red pants. It seems I could well be Cleopatra, it’s all gone a bit odd.

The crew of one of the boats had set the other adrift, not realising :-

a. The Llangollen canal has a steady flow.

b. The keys to that boat were currently missing.

Chaps in pants were trying to rescue themselves. Red pants did make an effort to cover up – last seen sporting a comedy captains hat and red pants. So, where’s the Ibis?

Keys found, they set off after offering apologies for this morning’s noise and thanking us the small attempts to help them we’d made. Some rowdy stags are much better behaved and more p 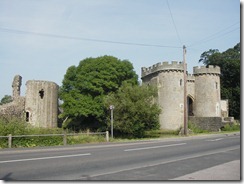 Once we were up and about Graham spotted that the batteries were down to 12% capacity due to the fridge not liking the hot weather and the original wiring to it being too small to pass sufficient current. We started the engine while we 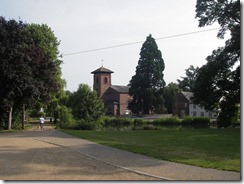 breakfasted to put some charge back in before we took a trip in the car to visit Whittington to look at the remains of the castle and the lovely Italianate village church.

On our return we set off in the boat towards Frankton junction and very soon we actually spotted the Sacred Ibis, in afield of sheep. Unfortunately it was too far away to photograph. Shortly after that we pulled over and Graham started running a pair of heavy duty cables through the trunking to provide a higher capacity feed to the fridge. By 12 am the cables were run so we continued on to Frankton Junction for our 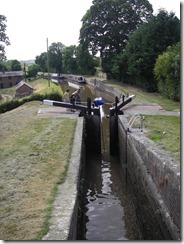 booked passage down the locks onto the Montgomery canal. We were last in the queue and had a long wait with no shade at all. As the temperature rose through 30 degrees the wait became longer as the lock keeper had to ‘call a man out’ to remove a car tyre from the cill of the bottom lock. The family on the boat in front were from the Shetland Isles and were really suffering from the heat. They had brought lots of wet and cold weather clothes with them for their fortnights hire and were surprised that summer had arrived.

Once through the locks we headed for the first bit of decent shade on the towpath, just past Graham Palmer lock where we had a bit of a siesta to 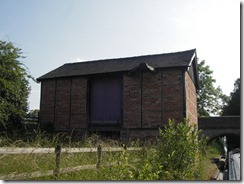 cool down. At 5pm it started to cool down so we continued on through Queens Head and the three Ashton locks and arrived at Maesbury Marsh services at 7pm. We ate tea, filled with water, pumped out the loo tank and both showered in the very nicely kept shower room there. Then we continued on to the end of navigation, turned round and moored upon a 48 hour mooring at 9:30. After a much needed brew it was almost bed time.

Wow Brenda what a long day you had. Wise to motor when it is cooler, but I think we would always be worried about whether we could find a mooring that late at night! Enjoy your July holiday.

We must have been on the Llangollen at the same time as you Brenda but we didn't go up the Monty. Heard about the Ibis but didn't see it. Can confirm 2 stag boats though. Started out at Jack Myttons in Hindford and found their boat hooter at 1.30am. Hilarious watching them diving over, on around the first lock. Averina. Based at Audlem