Last night in the pub, the crews of three boats moored on the pub moorings told us they were starting off at 5:30 am to avoid the queues at the locks. When we set off at 9am they were still tied onto the pub moorings – it would appear that one of their dogs had gone AWOL during morning walkies – well after 5:30 it was admitted. A second search party was being despatched to try and find the hound.

Graham went and assisted the boat in front of us through the first lock and at the second lock he told me that I would find just the thing for our new kitchen when I got there. We have purchased some odd souvenirs from the lockside on our travels but a brand new radiator from a garden wall sale has to be amongst the oddest. A bargain never the less. 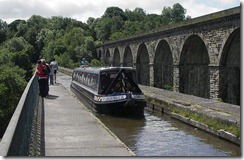 Onto Chirk, in lovely weather and superb countryside. Happy bunnies until we met two American crews who seem a little short on common sense. One crew had moored up in the inter-tunnel/aqueduct waiting area so that they could take a shower and sunbathe. As another, empty, hire-boat was moored there as well this meant that there was no where to hold Jannock whilst waiting for 20 minutes for three southbound boats to pass through the tunnel. Somewhat disgusted by Graham positioning Jannock’s stern against their boat a member of their crew came out to see what was going on. G explained that they were tied up in a very inconvenient, indeed wrong, place only to be told that there was no notice 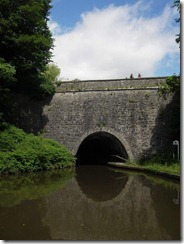 saying so. G explained about not mooring on bollards as they indicated waiting areas but the crew claimed ignorance and returned to whatever they were doing inside. Let’s hope every northbound boat that had to wait for the tunnel annoyed them.

Boats continued to follow each other through the tunnel from the Northern end so I decided to walk through with a radio to tell Graham when it was likely to be clear and try to convince some-one to hold off to let North bound boats have a turn. The first boat along, a hirer, agreed to wait and moored up on the bankside and then took his crew for a walk in the woods. The second boat, hmmmmmmm another American couple, pulled onto the waiting area, pulled back, bobbed about a bit and just as Graham called to say that Jannock had entered the tunnel they went for it. I signalled to them not to enter but they just grinned and moved forward to enter. I shouted to them but they just continued towards the tunnel mouth. Then they got the message and came over to see what MY problem was. I told them that I knew there was another boat coming through, I showed them that I had radio contact. They said it was OK as they couldn’t see another boat coming through. No, because they were unable to see through the full length of the tunnel from where they were, geometry and all that.Then they suggested that I was from a moored boat on this end of the tunnel and was trying to ‘queue jump’ them, they couldn’t understand that I had walked up from the other portal. Eventually they gave in and moored up on the 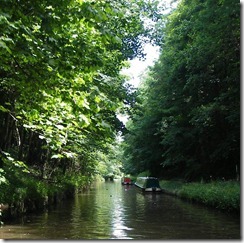 bollards and looked quite annoyed when I said there would be about a 10 minute wait. I was told “I know, we can see the light in the tunnel now we are on this side of the canal” A second boat then entered the southern portal a few minutes behind Jannock, he, he, he!

We continued on past Chirk marina and through the second tunnel with a slight wait due to a horn signal indicating another boat passing through. Once through we experienced no further issues and found a suitable mooring to stop at.