After a peaceful night the sun was up and at ‘em early. We, on the other hand arose and breakfasted ready for a 9:30 start and a leisurely cruise 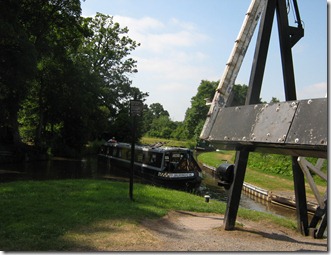 through the four lift bridges to Grindley Brook. We filled with water and then moved up to the locks. It was very busy in both directions, with the lockie letting three boats go in each direction in turn, so waiting was the order of the day; except for one westbound crew who should have known better. They re-opened the bottom gates of the lower lock and tried to enter 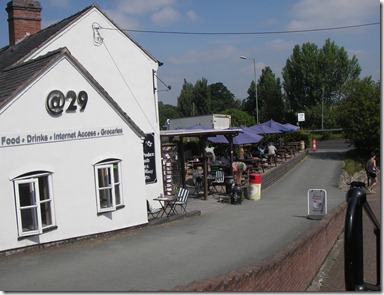 (4th in a row) against the lock-keepers instructions. Flea was inserted in ear and they had to reverse back onto the waiting area where they sat uncomfortably. We were second down in our batch and there was still huffing and puffing when Jannock came out of the bottom of the staircase. Brenda chose to  sit and wait in the bridge-hole below the locks until the next lock, out of sight around a corner, was ready. With one more boat coming down behind and three already waiting in the pound to ascend it seemed the best option (plus it was in the shade ;^) Oh how she huffed!

It had got very hot by the time we had cleared the last three single locks and so it was ‘shady tree time’. A suitable candidate was identified and lunch and siesta time were taken.

Then on to Wrensbury closely followed by a woman in a canoe. We’d first seen her at Ellesmere, filling up her bottles with drinking water. To paddle all that way with no portage at locks, a true Amazon. We moored near Starkey’s bridge, next the the boater that Brenda had been discussing the merits of Nepalese curries with at Grindley Brook. Our curry du jour was made in the slow cooker. We also didn’t want any extra heat in the cabin and so the Peshwari nans, Mr Tescos finest, were heated up by wrapping them in tin foil and putting them on top of the engine for the last half hour.

After dinner Graham checked the water levels in the batteries and did boat polishing until it got dark. At least Jannock doesn’t look like a hay stack any more having been strimmed three times in as many weeks on the Llangollen.