Having been home to do some washing, shopping and collect all the paraphernalia we needed for the Cutweb rally we returned to Jannock and prepared to descend Stockton locks. We waited during which time we had lunch but no-one else appeared travelling Northbound and so we finally set off down the flight solo. No lock wheeling bicycle as I’d taken it home but luckily Ken Kroeker from nb Helmsman appeared and lock set for us so we completed the flight in 1 hour and 10 minutes. We moored up on the outside of a three abreast raft at the end of the Blue Lias garden.

Friday evening we joined the collection of Cutweb members eating in the top end of the bar of the pub where our rally was being held. Their new bar food menu received very positive comments from some of us regular rally attendees. We have themed this year as the ‘Jubilympics’ and so at 22:00 hrs Brian Holt lit the pseudo Olympic torch (converted bird feeder sprayed gold) that he bought on Ebay which immediately went out again. After being relit several times we all retired to bed to prepare for a day of sporting action tomorrow.

Saturday morning arrived with glorious sunny weather which bode well for our planned ‘Jubilympic’ event. We started a selection of games before lunch that continued on through the afternoon. These included Athletic, Equestrian, Sailing, Winter and Raquet sports in which no animals were really harmed at all. They continued most of the afternoon until the Jubilympic steet party started. For this we arranged a collection of the pub’s garden tables into a long line and eat lots of cake, more cake and even more cake. 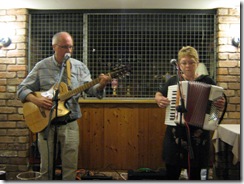 Gold medals were awarded to the games winners at the end of the party. Saturday evenings entertainment came in four parts, Kate Saffin performed her one-woman play Isobel’s War, Neil and Julie Smith entertained us with their own modern take on folk songs, the Queen (aka our club commodore in disguise) addressed us with a side splitting speech and finally a sample of Operatic and ‘last night of the proms’ favourites performed by Simon (a club member) and Camilla, both of whom are training and needed to perform in front of a willing audience. My only regret was that I did not get all of the pictures I’d hoped for because my camera was set to video mode instead of photo.

Sunday morning was colder but still dry and we started with a charitable auction of boaters tat and other unwanted items which was followed by an excellent Sunday lunch. In the afternoon we had a completely new event for a Cutweb rally – a boat tug of war with three great participants. It was great to watch although a little un-nerving for the poor guy moored on the towpath opposite the pub garden as well as the occasional passing hire-boat. Late afternoon, Matt (No. 2 son) and Ali arrived as they are taking Jannock over for a weeks holiday when we finish on Monday. The sunday evening quiz, which contained a fresh format, was prepared and presented by Neil and Linda Arlidge of nb Earnest. Our ‘Team Keens’ didn’t win or come last so we were happy.  Some more medals were awarded before we finally gave in and went to bed.

Monday morning was even colder and very wet as it had rained hard during the night. I arose early and moved the car to our planned destination, returning on the Di Blasi, in time for breakfast. We moved Jannock over onto the towpath side of the cut, filled with water and then shared the Stockton flight with Simon aboard nb Vida~Nueva. Once out of Stockton flight we moved on to Calcutt where we shared with John on nb Black Pig during which Ali steered through her first two locks. Left at the junction after which she drove into her first hedge before we pulled over, removed our clutter and waved goodbye to Jannock as she went off towards Braunston.

On our way home we called in at the Wharf Inn at Fenny Compton for lunch. The place is obviously under new management since our last visit and the food was excellent. We chose two items from the ‘two for £10’ (11am to 6pm) selection and were surprised at the size and quality of what we received. We were so full after just a main course that we decided not to have the deserts that we had already chosen from the menu. Another establishment that now gets a ‘Jannock Recommendation’ as they also have a shop and a launderette. Where else can you sit and have a pint or two whilst your smalls are doing? There was one old local who came in and had a pint whilst the bar maid made up his shopping order for him to take away – a brilliant local service.