We returned to Jannock late last night after 22 days absence. It had been a treat to see the grass and fields becoming more green as we travelled North unlike the brown at home.

We chose to drive up in the evening once the 30+ degree daytime temperatures had subsided, and there was a chance we wouldn’t be roasted alive in Jannock’s cabin. A good call. We moved all our stuff aboard from the car and then had a good night’s sleep. 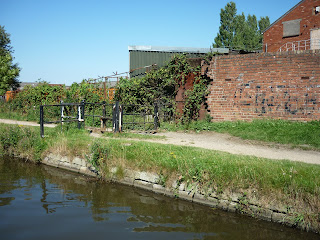 Graham was up at sparrow’s fart getting all the little jobs done ready for us to bid farewell to Jannock’s home for too many weeks this summer. We travelled about a mile Westwards, through both Crabtree and New Lane swing bridges to the winding hole just before the permanently open Great Score bridge. Here we turned and then returned to Burscough once again where we filled with water before moving onto a visitor mooring to do the shopping. 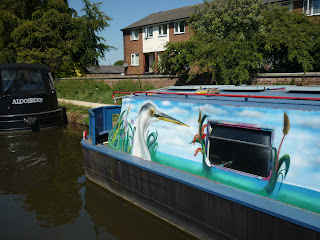 It was so hot that we decided to save shopping for later and brave out the heat using a jerry rigged sunshade over the foredeck. It still managed to reach over 34 degrees inside Jannock’s cabin.

When we finally decided to wander up Tescos for our provisions at 6pm it was still warm. Summer fashion had paraded past us all day on the cat-walk that is the towpath at Burscough. The worst of summer fashions had been worn earlier by a poor girl who walked towards us on Burscough high street with bright red sunburnt knees – she had obviously been wearing jeans with ripped knees earlier and will definitely be paying the price tonight! Sore or what?

Good to see you are back on board